Nurseries and Neighbors: Methods to bridge the labor and class divide 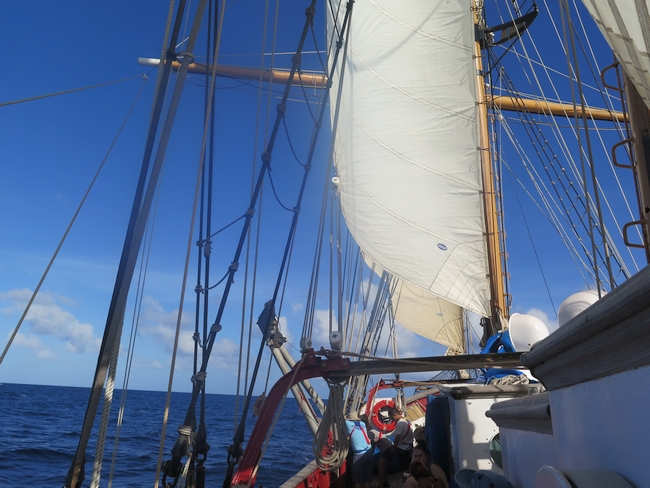 Coral counts are diminishing around the world. Here in the USVI, bleaching and disease has had a devastating impact on coral populations, especially the staghorn and elkhorn species of coral. In order to help reverse these disastrous effects, coral nurseries have started to be implemented. Coral nurseries are important to coral restoration because they help produce more corals that can then be transplanted to supplement existing reefs. They take endangered or hurt corals and allow them to grow and duplicate in a conducive environment. There are four types of in-water coral nurseries: line nurseries (vertical and horizontal), fixed nurseries, and coral trees. Each one has its own advantages and disadvantages, but overall, coral trees have tended to be the method of choice for most nurseries going forward after their introduction in 2011.

The purpose of our policy brief was to investigate and communicate action to reinvigorate and expand production in coral reef nurseries within the Florida Keys in order to compensate for further degradation of coral reefs therein. As such the solutions we condone, and in fact strongly suggest involve effectively integrating: citizen scientists, community outreach education, integrated management across watersheds, genotype-focused growing practices, triangular substrates, and self-sustained starter fragment harvesting to best serve the Florida Keys reef community.

While most of our research was done looking at coral nurseries and policies in the Florida Keys, a lot of our research can be transferred to the USVI. Most of the solutions we came up with are solutions that we think can work here too. Coral reefs everywhere are facing threats of degradation and with improving policies, coral nurseries can become a more prominent and accessible form of coral restoration.

Interviews with Local Experts On November 17th we had the pleasure of talking with Richard “Wes” O’Dell, a charter boat captain out of St. Thomas, about his experiences as a local returning to the islands later in life. O’Dell was born in the US Virgin Islands, but spent most of his school years in the continental US. Following an extended stay in Newport, Rhode Island as a Captain, he returned home to the islands after hurricane Maria. He currently works as a charter boat captain, with a wide range of clientele. He discussed with us his desire to work with local schools to create afterschool programs that get students out on the water and foster a love and respect for the ocean at a young age. There is a cultural divide in the perception of the ocean and its place in society in the USVI, and Wes hopes to overcome it with his vessel and the creation of positive experiences therein with the next generation. As he said, “it all boils down to education and getting outside that comfort zone” (Richard “Wes” O’Dell). It was wonderful to meet with such a staunch activist for environmental education and community outreach programs on a local, actionable, level.

On November 19th we met with Dr. Kim Waddell, the director of the Virgin Islands Experimental Program to Stimulate Competitive Research (VI-EPSCoR), to discuss the Ridge to Reef program and coral restoration efforts. We were quite excited at the prospect, as his work lines up very well with our proposed policy. When asked if there are any local policies to protect nurseries and programs that allow community participation, he had an interesting, multifaceted answer. In the USVI most offshore nurseries are in Marine Protected Areas (MPA) or territorial waters and are marked for fishermen and boaters. Community engagement is quite modest, mostly driven by tourism, universities, or NGOs involved in the issue. Once installed, tourists and local divers can help plant fragments. Individuals also come out on a monthly basis to clean the growing corals. These nurseries are primarily coral trees, much like we advocated for in our proposal. Waddell also talked about how many Caribbean islanders don’t swim. It is considered a leisure activity and requires lots of free time, money, etc. Locals want better quality of life, and tourists to come, as they drive the economy. Personal and commercial involvement in the coral nursery sector is modest at best. When asked if more community involvement would help, he said only if they expanded operations. One needs to target specific groups of people, fishermen for example, rather than the community as a whole. Waddell suggested starting closer to where people live. Start with things they relate to and then go bigger: “coral restoration is downstream, both literally and figuratively” (Waddell). Improvements on land will lead to improvements at sea. The ideal solution he presented is working with children in grades k-12. They are the most open minded with regards to change and are excited to learn. If this next generation stays in the territory they can become a real force for the good of their islands and the reefs that surround them.

We also had the opportunity to talk to two people who are very knowledgeable about coral conservation and MPAs here in St. Croix: Matt and Caroline. Matt is the USVI Coral Reef Initiative Coordinator and Caroline is the East End Marine Park Coordinator.

There are two coral nurseries in St. Croix. From our research, we learned that it is expensive to provide upkeep for coral nurseries. Matt confirmed this. He said that most of the time, the same team of staff members, about 3-4 divers, provide all the upkeep for these two coral nurseries. We thought that a good solution to this expensive upkeep was to employ the help of citizen scientists. Matt agreed! He said that there are a few programs in St. Croix, usually through dive shops or education programs, which take volunteers on coral nursery tours where they provide maintenance and upkeep for the corals. While this is a great help, they are limited because of the small number of volunteer divers. Many locals and local communities on the island are not as involved with coral nurseries because of the expense that comes with learning to dive and diving itself. This makes many citizen scientist programs inaccessible to the public, relying on outsiders like tourists to volunteer. Matt said that there are a few groups from UVI that come down to St. Croix to help with coral restoration, but a lot of their efforts are focused in St. Thomas. In the future, Matt hopes to grow the coral restoration program and expand the number of coral nurseries in the USVI, especially St. Croix. However, at the moment, they are limited by funds. While they do get money from NOAA every two years, the process for getting money from the federal government is tricky. Most of Matt and Caroline’s job is writing grant proposals and going through the process of trying to get money if the grants are approved.

While talking with Caroline, she mentioned how slow the process of writing policies and getting policies put in place is. She said that public actions move faster than public policy. Even when policies do get instated, they often are reactive not proactive. This means that the policies are put into place to address something that has already happened, not something that could happen. This relates to coral nurseries because some nurseries get fragments from boat accidents or from other coral disasters that could have been prevented if more MPAs are put into place or activities are more restrictive around coral reefs. The conversations we had with Matt and Caroline were very illuminating. Before talking to them, we did not consider the costs or accessibility issues surrounding citizen scientists. While these programs are great for coral nursery upkeep because of free labor, it is not a viable option for everyone. There need to be other educational programs created that allow everyone to have the opportunity to be in a coral reef environment, without physically being there. Programs could involve virtual reality, underwater cameras, or aquarium workshops. Any program that helps get people interested and invested in coral restoration would help coral reefs and nurseries because more people devoted to helping coral will help more policies protecting them go through.

Human Uses of the Environment We noticed several patterns in the anchorages we were able to stop in during our trip. By utilizing the Human Uses of Ocean Space Census we were able to effectively tally said observations. The vast majority of the boats we saw were individual pleasure craft (catamarans, to be specific), charter boats, and few industrial or research vessels. This makes complete sense as most of the areas we visited were often just off of resorts or other tourist destinations. We also saw a surprising number of damaged or just straight up abandoned boats. These were often situated closer to areas inhabited by locals rather than tourists. None of the places we anchored would be ideal for our nurseries. They were all too focused on catering to the needs of humans, be it for life sustaining things like fishing or even recreation, to even think about catering to the needs of corals. Many of our anchorages were close to public beaches with fast, small boats driving around, which also indicates how a coral nursery, let alone a coral reef, would not thrive in this environment. These data fit well with what we learned from our guest speakers. The unequal ratios of locals to tourists and pleasure vessels to ones focused on industry speaks volumes about how people here interact with the ocean. As Waddell pointed out there is a deep cultural divide when it comes to a personal relationship with the ocean in the USVI. Our abandoned vessels were most likely damaged in a hurricane, and repair, in the eyes of the people, is not worth the time, effort, and money it would take. It is better to leave the vessel to rot than invest in it. Our Human Uses of Ocean Space Census also showed us how much coral nurseries are needed. Many of the spots where we were doing our coral reef surveys were close to these highly touristy areas. We even noted during our anchorage at Perseverance Bay in St. Thomas how one boat simply anchored straight on a coral reef. Our policy sets out to amend this attitude and compel the next generation to both care about and take care of the oceans around them.