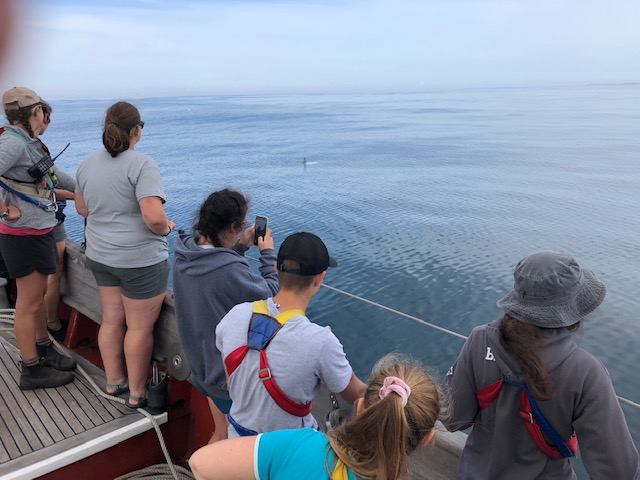 We take a break from your regularly scheduled programming to give you a quick rundown of the best (and worst) parts of the ship. As we are scientific-minded fellows, this shall be in the tried-and-true form of a countdown list. Without further ado, here are the Five Things We Miss About Land and the Five Things We’ll Miss About The Sea.

Five Things We Miss About Land

True, the seasickness does wear off for most after a couple of days. But nevertheless, there is something very comforting about a floorboard which doesn’t try to throw you to the ground, or a table which tilts all throughout meals. Perhaps others have talked about it, or perhaps not, but we have gimbaled tables in the Main Saloon (our eating area). In order to prevent our treasured food from sliding off during meals, the tables are weighted on the bottom to not move with the ship, but stay parallel to the surface of the Earth. It is a fantastic help most of the time, but it’s easy to forget and casually rest your arm on the table, only for plates and dishes to go sliding about from the excess force.

It’s hit some harder than others, but an old sailor’s superstition outlaws any whistling on the ship. As someone with an atrocious humming voice and an addiction to whistling, it has been particularly challenging to keep my lips shut. Too many times I’ve caught myself (or worse, someone else has caught me) absentmindedly whistling a tune.

It might seem strange, but we’ve mused multiple times over how much we miss green grass. There’s something so jarring about looking out and only seeing water and everything constantly moving. Even worse, when it’s hazy out, everything except the red sides of our boat is just gray. And we can’t forget the pure joy of rolling down a grassy hill. When I get home, the first thing I’ll do is a couple somersaults.

On the boat, someone’s always sleeping, so jumping on deck is strictly prohibited. Even worse you could get hurt if the boat hits a swell when you land. There’s also no running on the boat (except of course when dorsal fins are spotted). Sometimes I want to move quickly for more than 130 feet at a time.

Our parents, relatives, friends. It hurts some of us more than others, but it hurts all of us at least a fair amount, to have had to be away from you all for so long. Some of us may sneak off Airplane Mode when we’re in Portland or P-town, but none of us have cell service out in the open ocean. It pains us all to not know how each and every one of you are doing, but we’re so excited for the day we can see (most of) your smiling faces on the dock (or perhaps imagine them, since the mask mandate doesn’t seem to be lifting anytime soon).

A notable few are “The Mola Mola! A fish so nice they named it twice!”, “Two whales walk into a bar…” and “We’re striking the Main, but we’re in Massachusetts!” We have nothing but appreciation for our chief scientist.

4. Sleeping On A Moving Ship

This one might be particular to us, as some people have certainly been getting worse sleep than others, but we think it’s justified. Three things contribute to the great sleep we’ve been getting (when we actually get it). The first is simple: we’re tired. Ship life is a busy life, and with the additional science and cleaning we do every watch, you finish your six hour shift a couple of years older than when you started it. The second also makes sense: a perfect white noise. True, the chirp (the scientific instrument we use to measure and record depth) can get a little annoying, but it is more than drowned out by the sound of the waves. On deck, the sea feels quiet, but in your bunk, there is nothing as nice as the water lapping against the other side of the hull. The final one is a bit more complicated: rocking. The rocking of the boat is akin to rocking as a baby in your parents arms (I’m not over-exaggerating here), but what is even better is when the wind pushes the ship one way or another, letting the wall of the bunk hug you tight. Unfortunately, half of the boat gets the wall hugs and the other half has to contend with the fear of falling out of the bunk.

And don’t forget the slightly less charismatic microfauna too. A whale sighting is always exciting, but far stranger is the pancake-like wiggling of the Mola Mola. Any hour of the day, if we spot something exciting, almost everyone is on deck within a minute. It’s a vast ocean that we’re traversing, and it helps to know that there are some animals who would do it with us. Besides, a whale is objectively more interesting than a rat, so the city folk of us are very pleased.

Now, I could launch into a long-winded explanation of how to deploy the Carousel or how to process Chlorophyll-a samples, but I’ll spare you for now until your C-297B student comes home to tell you all about it. The science we’ve been doing is absolutely fascinating. From the critters we catch in the meter net to 100-counts of phytoplankton, there’s always something happening in the lab, even into the wee hours of the morning. One of my favorite things is nighttime lab watch, when everything is dark and everyone is tired, but we pull out the Lab Haiku book, spin the disco ball and get psyched about digging through zooplankton sludge. Trust me, it’s a lot of fun.

We’ve only known each other now for three weeks, but it feels like a lifetime. It’s going to be really hard to say goodbye to the Cramer when we return on Sunday, but it’s going to be impossible to say goodbye to each other. You can’t just go through an experience like this—life changing for so many of us—and just forget about the people you shared it with. No one else will ever understand our inside jokes, remember every sunset and the first time we saw the Milky Way or know what it was like to go through every possible emotion together. Two straight weeks is a long time to spend with the same group of 38 people on a 130 foot long space, but we’ve made it home and made each other family. As tough as it will be to be spread out across a country as big as the United States, we’ll remember each other by our journals and friendship bracelets, and the internet always helps.