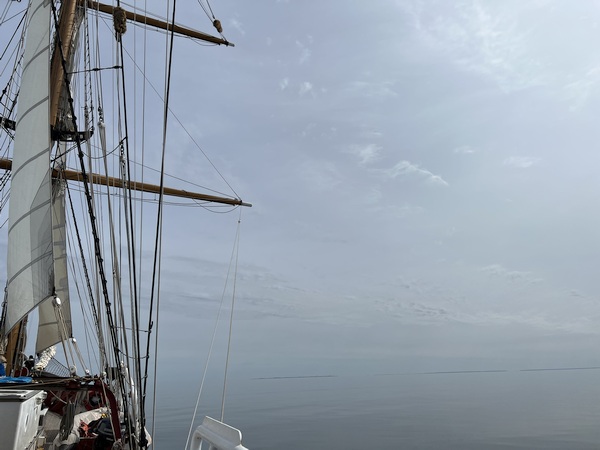 Cramer back in New England Waters

Living in the modern age, we are consistently surrounded by noise. On land, every sense is bombarded with daily distractions created by social media, advertising, email, and the bustle of social norms and interaction. Upon arrival to Key West, we students were given a short period of time to make our final calls, emails, texts, and so forth before handing over our phones to the captain.

This allowed us to isolate ourselves from outside distraction and focus on an acclimation to ship life. Miles offshore and out of range of any cell signals, we were given them back. However, limited use is highly encouraged and music from an electronic device is not allowed unless we are having a field day session. This has not only been refreshing, but has allowed us to truly become in-tune with our environment. 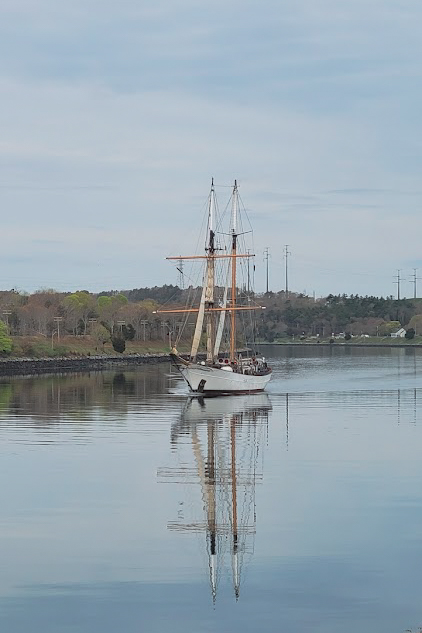 Travelling up the coast has given us a steady change in our visuals, smells, sounds, sensations, and yes, even tastes. Leaving the south Florida coastline, the air was heavy with humidity and heat. We would see south Atlantic wildlife like pelicans, frigate birds, manatees, and reef fishes.

Shrimp trawlers and schooners dotted the horizon, rigging illuminated in the night while we sat at anchor. As we moved north, fewer vessels could be seen and the lights from shore died away. The waters remained a bright turquoise as we sailed towards north Florida and Georgia. These first couple of weeks had me tuned to learning the ship the most. Apart from the observations made above, I devoted my attention to understanding the smells, sounds, and sights of the Cramer, ensuring I understood what her normal state was and to be aware of something amiss. This included observations made on the state of the engine, the generators, the leads of rigging, the feel of the helm, and much more.

Moving away from shore and into the Sargasso Sea brought a new environment in addition to an expansion of awareness beyond the ship. Looking out to sea, no land was visible. Among the chop of the water, abrupt splashes revealed flying fish launching themselves into the air. Below the surface, blue-green streaks of mahi flashed by. Even with the sheer amount of ocean around, we were unable to smell the water, a true sign of the Open Ocean and overall lack of primary productivity. However, patches of sargassum and nighttime net deployments changed this perspective.

During the day, tows along the surface would bring up clumps of yellow-brown sargassum and among it would be a plethora of invertebrate and fish life, either designed to blend in with the algae or the bright blue of the pelagic environment. At night, tows would produce incredible bioluminescent light shows. Some hauls had the ability to create an atmospheric glow with only a gentle touch of your hand to the net’s surface. Standing on the science deck, you could be surrounded by stars, those above in the sky as well as those from the sea, now collected in fabric mesh. These were some of my favorite nights.
However, many days are not as pleasant.

Visually, the sea state changes and sometimes brings itself to you with a strong crash against the hull, sending salty spray into your face. If the swell picks up, you must quickly adapt to the ways you move around the ship to ensure stability and safety. From below, it has become pretty clear when we are entering a new sea state, have changed tack, or trimmed the sails. When we entered the Gulf Stream, I was posted as bow lookout during a dawn watch. This was one of my first times experiencing such a powerful current. Cramer jetted through churning waters moving more than 5 kts and bucked her way to the other side, near the New Jersey coast. Later that day during evening watch, we were joined by continuous flashes of lightning from a system miles away and a pod of dolphins creating bioluminescent streaks through the water beside our hull.

It was a very dark night with only a sliver of a moon and a lot of cloud cover. However, I began to hear the patterns of the ocean around the ship. The dolphins coming close to Cramer’s quarter deck could be heard rushing through the waves and breaking the surface, each time taking a breath and making their presence known.

We are now in New England waters. An immediate change was the scent and color of the water. We are in a grey-blue ocean with a distinct salty smell.
Yesterday, we sailed by pods of dolphins and whales feeding in Massachusetts Bay. The air was fishy and cold and the water glassy. The only sounds, other than our cries of joy, were the gulls and gannets overhead and the activities of our neighboring megafauna.

Friends and family, I’ll see you soon in Woods Hole to share more tales of my adventures!