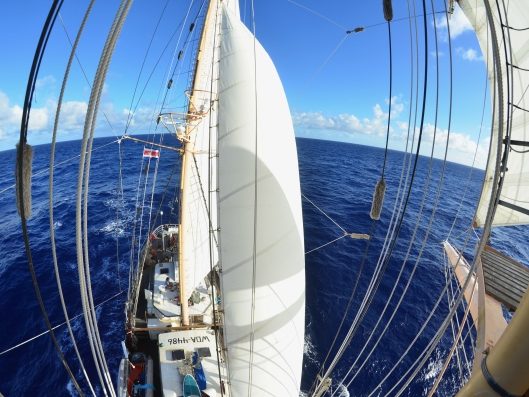 Winds/ Sail Plan
Force 5 from ENE. Sailing under the four lowers (mains’l, stays’ls, and jib) on a starboard tack

Hello, everyone! Second scientist Lila here, pleased to be bringing you news of the avian variety. As a skilled scientist and avid biologist, I have been spending much time with the masked boobies that have graced our yardarm and headrig (you are undoubtedly familiar with these birds if you have been reading this blog regularly). I go and sit with them sometimes, and remain very still, occasionally emitting a squawk or two when it feels right. It has taken four weeks, and I do believe they have finally accepted me as one of their own. There are six of them now (seven if you count me), and they sit and watch the Seamans all day and night, discussing their observations with one another in a diplomatic, rather contemplative fashion; we are probably the first humans many of them have been this close to.

Their language is one of cacophonous squeaks, miniscule head tilts, and plumage ruffles, and I speak it quite well now. The boobies have much wisdom to share, and so I would like to take this opportunity to pass some of it on to those who read this blog. Without further ado, here is the life of S-301 from the eyes of a boat-bird:

The rolls of ocean this large piece of jetsam floats across continue to be long and high, so that I must extend my wings to keep my balance in my ever precarious position. The strange creatures below me, however, don't have wings. Instead, they meander thoughtfully about and use some sort of featherless, branchlike protrusions to grasp the outcroppings and protuberances of our sea-dwelling. With this, they are able to maintain 3 points of contact and stay surprisingly stable.I think if I had similar limbs I might be able to catch more flying fish.

The weird, bald animals that inhabit this vessel occasionally exhibit a squawking of their own, although it sounds very different than ours. There was quite a commotion several hours ago; the day star sank into the water and the sky was dark. The things on the flotsam were standing all together with a weird bend in their necks, so they could observe upwards. I can only guess they were examining the points of silver in the sky (the nature of which my brethren and I discuss often; I am sure they must be very far away flying fish, because otherwise why would anyone stare at them with such fervor?). Every once in a while a long, skinny light beam would shoot from the bald things to the sky-fish, marking out certain ones, or small groups of them? Every few minutes, one of the flying fish in the sky would leap out of the sky and fall towards the water. When this happened, the creatures on deck would let out large, long exhales, and jump up and down and point. Perhaps they think the fish will fall close to them and they will get an easy meal? One such fish flew for so long across the sky, with a tail longer than I have seen on any fish before. This excited the creatures more than anything.

The one who thinks she is a bird (she often sits near us and makes strange noises, mocking us) has told us that her kind is called "say-lor." She also mentioned that it's her mom's birthday, and that she misses her best friend Rosalie.