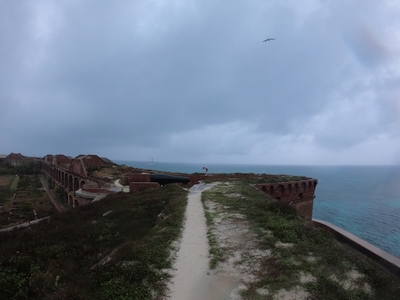 The view atop Fort Jefferson, with a Frigate flying over Alex and the Corwith Cramer in the background

Weather / Wind / Sail Plan
Hazy with light rain throughout the afternoon, and light wind coming from the NE. Vessel docked until tomorrow after which we will head east.

Description of location
Dry Tortugas National Park is home to a wide range of wildlife: most famously the coral reefs and all they support as well as a variety of turtles (such as the green, loggerhead, and hawksbill turtles) which gives the namesake of Dry Tortugas. Within this cluster of 7 islands, a mass migration occurs every year. From January to October every year, more than 100,000 sooty terns and as many as 10,000 brown boobies inhabit Key Bush for nesting season. This is pretty exciting stuff for our seabird team (Anna and Kass), who are collecting data on what seabirds are found where, and what factors might affect their distribution. At this point, they pretty much have the whole boat looking for birds and frantically trying to identify at all times of the day. You can often hear someone saying, ‘Grab the binos’ after spotting a cool bird in the distance.

Even though we’ve only been sailing for 5 days, it feels like I’ve lived on this boat for weeks. Watches are hard work, and even though I’ve been spending pretty much all of my time off watch sleeping, I was pretty excited to get the chance to sleep in even more today. It never ceases to amaze me how many hours I can sleep if I have the chance. We’ve finally gotten a little bit of a break from the usual 6 hour on, 12 hour off watch schedule. Instead of having to stand our entire watch, we only have to stand for 1 ½ hours, but just while we’re docked here at Dry Tortugas. So today, I rolled out of bed at around 0930.

I somehow slept through breakfast, which is pretty surprising considering my bunk is in the main saloon where all the meals are, right up against the bench of one of the tables. I’ve definitely built up the ability to sleep through anything these past few days, a pretty essential ability out here if you want to sleep uninterrupted. 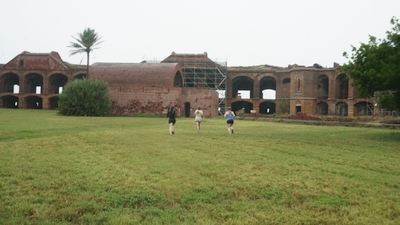 Arianna, Leanna and Sydney Marie (left to right) running across the field inside of Fort Jefferson. It felt pretty weird being back on land after more than a week on the boat, some of us could even still feel the sway of the boat if we closed our eyes.

But missing breakfast isn’t a big deal, because our snacks in-between meals aren’t just regular snacks. They’re sometimes chocolate chip banana bread, or pie, or artichoke dip and tortilla chips. Meals are equally if not more exciting. The food on this trip has been absolutely mind-blowingly delicious, and I just needed to add that in here as a note of appreciation for our two co-stewards, Katey and Will, whose food is both nourishing to our bodies but also to our souls.

I caught up on some sketches, as part of our daily drawing assignment we’ve had since we were on shore. This has been one of my newfound favorite activities since SEA Semester started. I was always too intimidated to do art because I never thought I would be good at it, but as soon as I stopped judging the result and just started appreciating the process, it became therapeutic and actually a lot of fun. 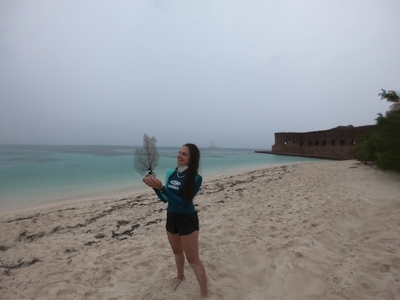 Daviana found a sea fan washed up on shore, which gave us the chance to see some cool marine life.

Finally, the moment we all had been waiting for. It’s hard to stand around all day looking at the vast open ocean, sweating from the humid Gulf of Mexico air, thinking about how nice it would be to actually get in the water, but not be able to jump in. But finally, we were going to be able to go swimming and snorkeling off the beach where Fort Jefferson was. A-watch had gone in the morning, and came back talking about the yellow corals that looked like cheerios and the darkest purple sea fans they had ever seen, the barracudas and tarpons swimming amongst them, and the cool way old piers had become a part of the coral reef environments. So everyone in B-watch and C-watch were pretty excited to get to experience it themselves.

As we started getting ready to head out in the small motor boat that would take us to Garden Key, it started to rain, and by the time I got there in one of the last groups over, it was thundering in the distance. I only got to swim for a couple of minutes before the staff decided it was best not to be in the water due to the weather, so I didn’t get a chance to snorkel. I was definitely pretty disappointed at first, but the stormy weather also meant that almost all the other tourists had cleared off the island pretty quickly, and we had the chance to explore without having to worry about being in a crowded public space.

We walked on the fine coral sand beach, finding dried sea fans and enjoying the tropical rain. We explored Fort Jefferson, and got to see some pretty astonishing views. Standing atop the fort, we could see hundreds maybe thousands of birds in some sort of frantic and highly vocal behavior swirling around the island. We got to see the Corwith Cramer from afar, looking so much smaller than it seems when we’re on it. It was a pretty spectacular day, and just another example of how things often turn out for the best, especially considering we get to go back tomorrow morning for another try at snorkeling, unless of course Mother Nature decides otherwise.

To all my family, miss you guys so much. Hope everyone is doing well, thinking of you all every single day <3 Tell Dani I said happy birthday !!