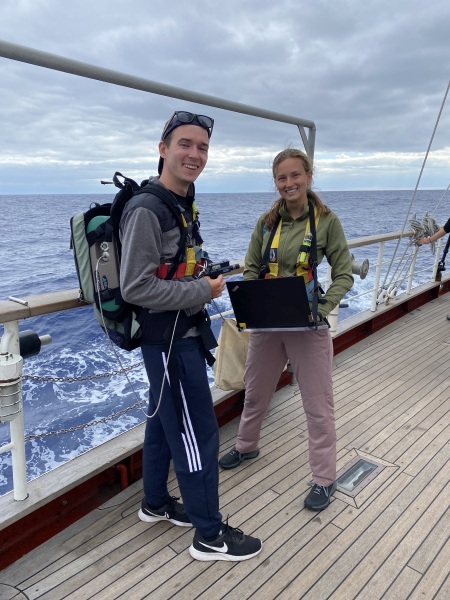 Back on land I’m a second-year Master’s student studying oceanography at the University of Connecticut, and out here I’m the visiting scientist for this cruise. In both cases, I study ocean optics and explore the relationship between optics and ocean plastics.

As you’ve no doubt read in previous blogs, the North Pacific Gyre is a major hotspot for the aggregation of ocean debris. However the North Pacific Gyre is vast in size, which can make the process of monitoring ocean plastics difficult. My field is interested in adding satellite data to the list of tools available for monitoring ocean plastics, which would be a valuable tool for studies at scale, but doing that requires an understanding of what plastics would look like to a satellite.

That’s where this cruise comes in. Each day I’m able to collect new ocean microplastics, which I can sample with a spectroradiometer to determine how they reflect light at different wavelengths. Then, this knowledge of reflectance properties for these “fresh” marine microplastics could be used to inform satellite-based plastic detection. Ultimately, there’s many more steps than what I can list here before satellite-based plastic tracking becomes truly viable, but my work is an important step in that process.

To do this work, I ultimately need some equipment. And for this job, the tool of choice is a field spectroradiometer. On the science side, the field spectroradiometer I’m using is capable of capturing reflectance properties in both the visible and infrared ranges. On the science fiction side however, this particular instrument has captured the imagination of our crew. The combination of the bulky, goofy backpack with the fiber-optic cable hand grip has earned this instrument the unofficial name of “the ghostbusters backpack” on this voyage. I’ve also been finding that each time I gear up for measurements I seem to be greeted by a rendition of the ghostbusters theme song from whoever happens to be nearby.

Once I’ve got my ghostbusters backpack equipped, it’s time to take some measurements. I start out my mornings by collecting spectral data on the water and sky at the edge of the ship with some help from Kat. These measurements let me determine the properties of the light that enters and is then reflected by the water, which will ultimately be used for satellite validation. These measurements can be tricky though, since the ship can move quite a lot while the measurements are occurring, so repetitions are essential.

Later on in the day we conduct a neuston net tow to sample ocean plastics.

After this, I spend some time picking microplastics out of the many organisms these tows collect. In the early days of the cruise this process took ~30 seconds, but as we approach the core of the gyre the amount of microplastic in each tow has increased dramatically, and I now find myself spending upwards of 15 minutes picking out plastic.

Once I’ve got some plastic, I gear up yet again and collect reflectance data. That often keeps me busy until dinner, when I get to enjoy whatever Cam, Nevin, and the day's student steward have prepared for us. Finally, I round out the day by spending a few hours on deck helping man the helm and lookout.

Overall it has been a great trip, I’ve been getting good data in the company of a great crew. Here’s to 2 more weeks!