Stratus Clouds with a Chance of Milky Way 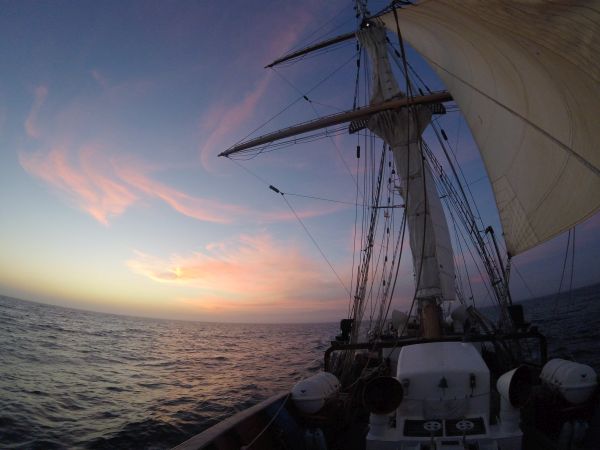 Our only sunset we’ve had so far, taken when I was on lookout.

It’s crazy to think that we’ve only been at sea for nine days! After a few watch rotations, everyone is pretty much settled into their 18 hour daily routine. As we head further into the Gyre the air temperature is slowly beginning to rise, hopefully we have some sunny days ahead! Overall life at sea is pretty swell (ha, get it?) and I’m amazed at how close knit this group has gotten in such a short amount of time. It feels like we have known each other for so much longer than we actually have. Personally, I found it very hard to get the proper amount of sleep needed to function well (especially on 0100 – 0700 dawn watch). I’ve ended up being awake quite a few times while the rest of my watch was asleep, eventually making myself sleep longer so that I’m well rested. Sleep has to be our number one priority, otherwise nothing gets done. I sleep more than I ever have, and I enjoy the rocking motion of the ship when my head hits the pillow, the fo’c’sle isn’t too bad after all! 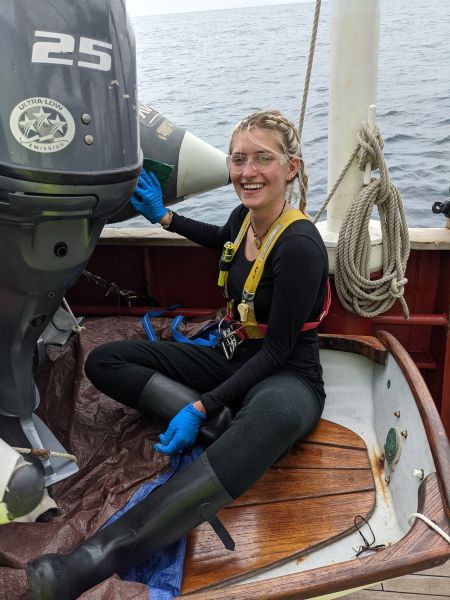 Me cleaning the marine life off the small boat.

Sail handling on a tall ship is so different than what I’m used to. It’s all about team work. Everyone has to put their all into it, even when they may not be feeling great in the moment. Two days ago I got to be the furthest person out on the bowsprit for a headsail furl during morning watch. I felt so alive. I was mildly terrified as the ocean was rushing by below the net we were standing on, but we were clipped in – safety first! Furling the JT (jib tops’l) takes a lot of might. I felt so accomplished after doing that, and am excited to get the opportunity to furl the JT on the bowsprit at night as well. Today I got to clamber up the bowsprit to undo sail ties so we could set the JT. Yesterday was our first day off, as every Sunday we do not have class, instead taking the time to get extra sleep, hang out, etc. I spent my time practicing my lines with Emily, Tadhg, Noah and Sam in preparation for the great line chase in two days. I also just sat and stared at the ocean. We’re really here! We’re in the Gyre! It’s incredible. Staring at the ocean for an extended period of time had me thinking about home for one of the first times since being aboard the ship. Dad, I wish you could be out here with me doing this, and I can’t wait to share all of my stories with you.

Last night the clouds finally opened up long enough for the Milky Way to make an appearance. I stood with my jaw hanging open, staring at the sky, while at the helm of the ship, bundled up in my foulies. It was one of the coolest things I’ve ever seen, and I’m so excited for more nights like this throughout the trip. I’m having the time of my life learning new things and I’m pumped for everything that is to come!

I hope home is good; I miss you guys so much, sending all my love to all of you. <3 xx