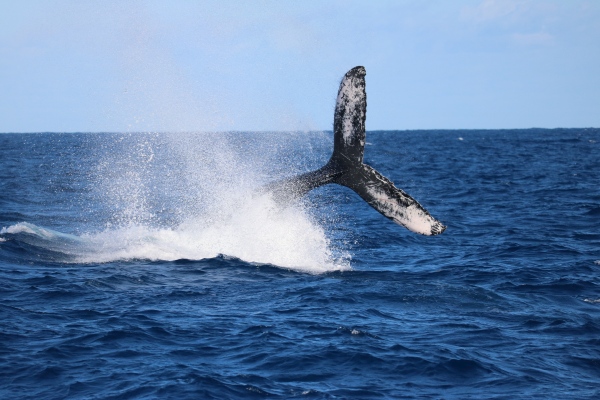 A fluke slap in Silver Bank!

Let me start off by saying that it is true; studying abroad really does enable you to get out of your comfort zone and practice those foreign language skills that you have been so diligently grooming since elementary school. Today, I can finally say with pride that all my years of studying, I have finally achieved communication status with the whales.

Currently we are anchored at Silver Bank, the prime breeding grounds for the North Atlantic Humpback whale population. Thanks to Genevieve Davis (from NOAA Passive Acoustics Lab in Woods Hole, MA) and the hydrophone, we were able to listen to the humpbacks' beautiful and foreign songs and calls that were traveling through the waves underneath us, up to 5 miles away.

Connected to speakers on the quarterdeck, the hydrophone has been playing a most exciting and confusing broadcast of the soundscape beneath us all day and will continue all night. When I first heard the song this morning I actually cried. It was surreal and sublime, and entirely too much for me to handle.  Of course, I attempted to communicate back to the whales, and politely respond, "Good! How are you?" However, my accent was too American, and theirs respectively too thick in North Atlantic humpback for a proper, productive conversation.

Highlights from the day include watching what must have been a Momma whale teaching her young calf how to properly put on a show for those who dwell above. The mother's great fluke appeared above the surface and smashed down with powerful force time and time again, creating an impressive splash even from a distance. Suddenly the calf picked up on it, stuck its fresh and immature fluke out of the water, and began to imitate its mother's behavior, creating only a dwarfed splash. Later, the same duo began breaching. The mother launched her body into the air, and spun with a glide across the air to return into the water on her great back. The calf tried with all its might! A bit more clumsily than its mom, it soared right out of the water, yet came up short on the rotation, scoring a 10/10 on the scale for a wicked belly-flop.

With each sighting of any surface action, a shriek of joy leaked out of each and every person on deck who was lucky enough to catch the moment.  Silver Bank is laced with some kind of ancient magic, provided annually by the most awesome organism on earth. It was evident today, in our truly happy spirits, pure smiles, and most genuine laughter, that everyone on the Corwith Cramer has been infected by this eternal ocean magic. I am certain that the memories and moments from Silver Bank today will not be forgotten. Really, a perfect day out here with C277.

- Meredith Sackett, A Watch!!, Sewanee: The University of the South

P.S. Happy Birthday to my big brother, James! Love and miss my family and all of my friends back on the land!