Sun, Snorkel, Smiles, and Stories: What Could Be Better Than This? 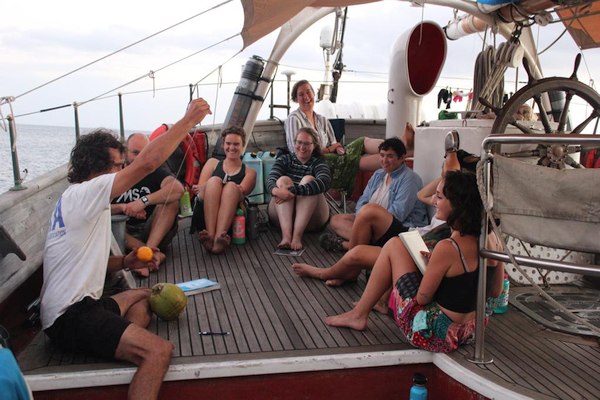 The celestial navigation class having a laugh (Photo by Shel)

In my eyes, seven has always been a lucky number, and lucky as I was to experience a day as full of laughter and connection as today, December 7 was no exception. 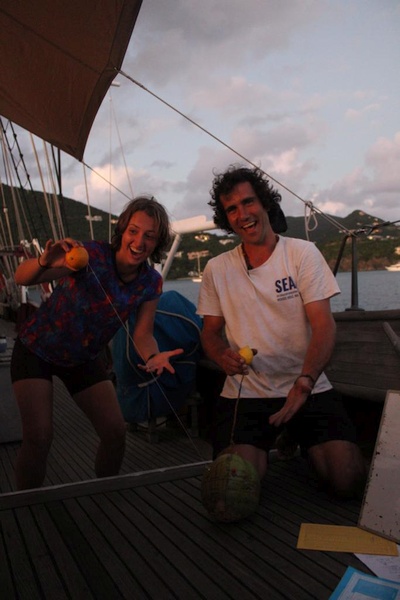 Today was our third day in Rendezvous Bay, and it has already become a second home for myself and the rest of the crew aboard the Cramer. Early this morning a peaceful silence stretched across the deck. From the elephant table, I watched hands cradle hot drinks and early morning stretches move slowly and steadily as the golden light painted our sleepy faces. Following the rise of the sun, the moment of bliss was soon interrupted by the giggles filling our lungs as we rolled around in a “happy baby” pose on the deck.

After getting our stretches and morning giggles in, it was off to breakfast.

For starboard watch, we had a morning snorkel survey at our Rendezvous Bay West site. Still exhilarated from my sneak peek of the reef the day before, I got ready in a heartbeat, and before I knew it, we were on our way to the transects in the rescue boat. Our tender-hearted coxwain, Seth, dropped us at the reef, and one backflip off the boat later, I found myself gazing upon what looked like a meadow of sea fans. Scattered between were some of the biggest Elkhorn corals I have ever seen—not to mention how many there were!

Among some of the most notable creature features for this snorkel was the lovely moon jellies, breathtaking spotted eagle ray, synchronously swimming squids, and the largest (and most curious) barracuda I have ever seen. My snorkel buddy Yifeng and I took advantage of some of our extra free time after sampling to do some underwater Qigong (which for the record was very relaxing). It was a good thing to relax then, because the next couple of hours would be consumed by chemistry sample processing. Surrounded by the red glow of the LED lights, we worked through pH samples, chlorophyll samples, and bacteria samples in record-breaking time and with stunning precision thanks to the help of Jess, Caroline, Elle, and Beans. 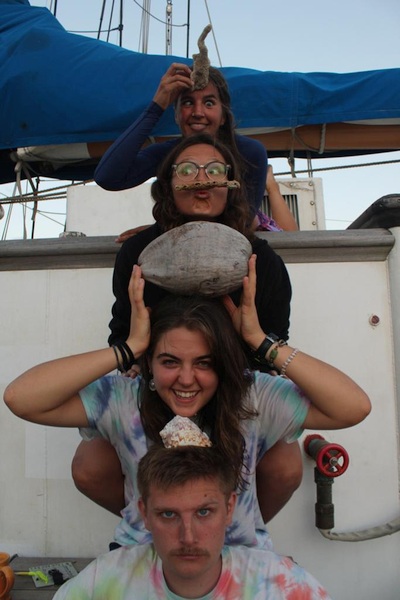 By the time we finished up in lab, quarterdeck crafts were in full swing, and starboard had the watch. After some downtime in the afternoon between watches, I gravitated up to the quarterdeck for a class on celestial navigation. First mate Nate recruited some stowaway coconuts and loose citrus to talk us through using the sun and stars to find our position on earth. As the evening approached and the sun began to set, the most beautiful light flooded the deck, and I ran to grab my camera. What started as an attempt to snap a few portraits became a ridiculously fun and silly photoshoot. Lending my camera to Shel, she snapped wholesome pictures of everyone she saw, and they were lovely. Laughter and smiles began to fill the deck one portrait at a time, right up to our evening muster. By the time we all settled down my abs hurt so much from all of the laughing. Dinner was filled with stories that continued long after the food was gone, and as the last of the sunlight left the sky, a bright full moon rose over the hills of St. John and lighted swam over the deck, illuminating our faces as we shared stories of our homes, our loves, and crazy dreams.