Sunny with a chance of dumplings 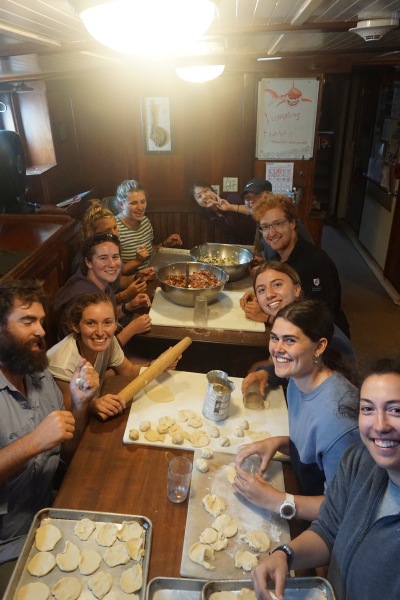 My day started today at 5:15, when I was awoken from my fellow A watchers to set breakfast as steward (cook) for the day. Breakfast was Breads and Spreads, so Cam and I quickly whipped together sourdough bread with candied nut butter, cream cheese with fig & walnuts, and mango, strawberry & chia jam. Anna said that it was her favorite breakfast so far which made my day, but this was only the beginning. After a short break Nevin and I started preparing for the afternoon snack which were egg tarts. I was really having a workout chopping up the butter when I hear Nevin gasp:

Uh oh, I added too much butter.

That's okay we can add more flour. How much did you add? Well it was supposed to be 24 tablespoons,  I added 72.

That's 114 people worth of pie crust-no wonder there was so much butter. Looks like we're going to be having pies for a while now (which is never a bad thing of course). 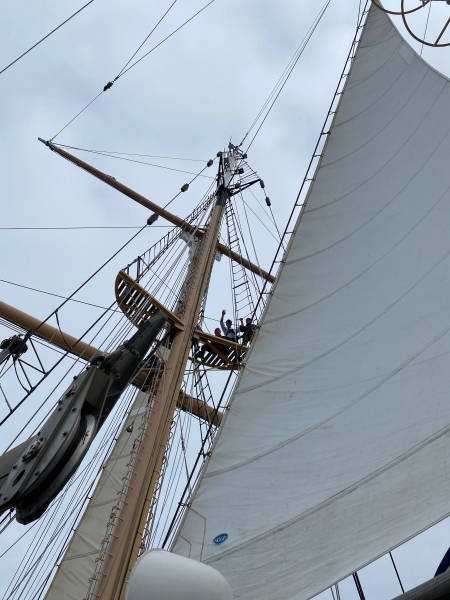 During class we finally got to climb aloft. Climbing up made me nervous as we technically only had our own hands and feet to rely on before clipping in. However, my fear was soon overcome with awe as I looked down at the view from above. Having a change of view after being on the ship for two weeks was really new, not to mention all of our tiny friends waving from down below! I definitely look forward to climbing higher up sometime soon.

The dinner menu was dumplings, and the start of it was not looking good as we had less than two hours to prepare 380 dumplings. As I frantically ran around preparing for the filling and sauce, I saw a whole army of dumpling-makers form in the main salon, creating our own little dumpling factory. These people saved my day and it made me happy to think that I had this many people to rely on (Thanks everyone, you guys are my heroes!). I think I received the most hugs I ever did in my life today, which definitely made all this dumpling madness worth the effort. Still feel like opening a restaurant is a bad idea though.

As I stood as look-out during the last two hours of my day I stared into the ocean and was yet again amazed by the amount of plastics that were floating by. They were appearing at a wild rate╛╛- at one point I was counting one every two minutes. Pulling off the organisms to clean  the plastic debris the other day made me think:

By doing this, are we helping the ocean or causing more habitat destruction?

What is the boundary between plastic pollution and evolution? Until what extent should and could humans help, and from what point should plastic be considered a part of nature?

PS: We ended up making 1000 dumplings. Ha, top that record! The Robert C. Seamans will now have a never-ending dumpling treasure hunt going on in the galley.