Sunshine on My Shoulders (or, Thoughts from Lookout) 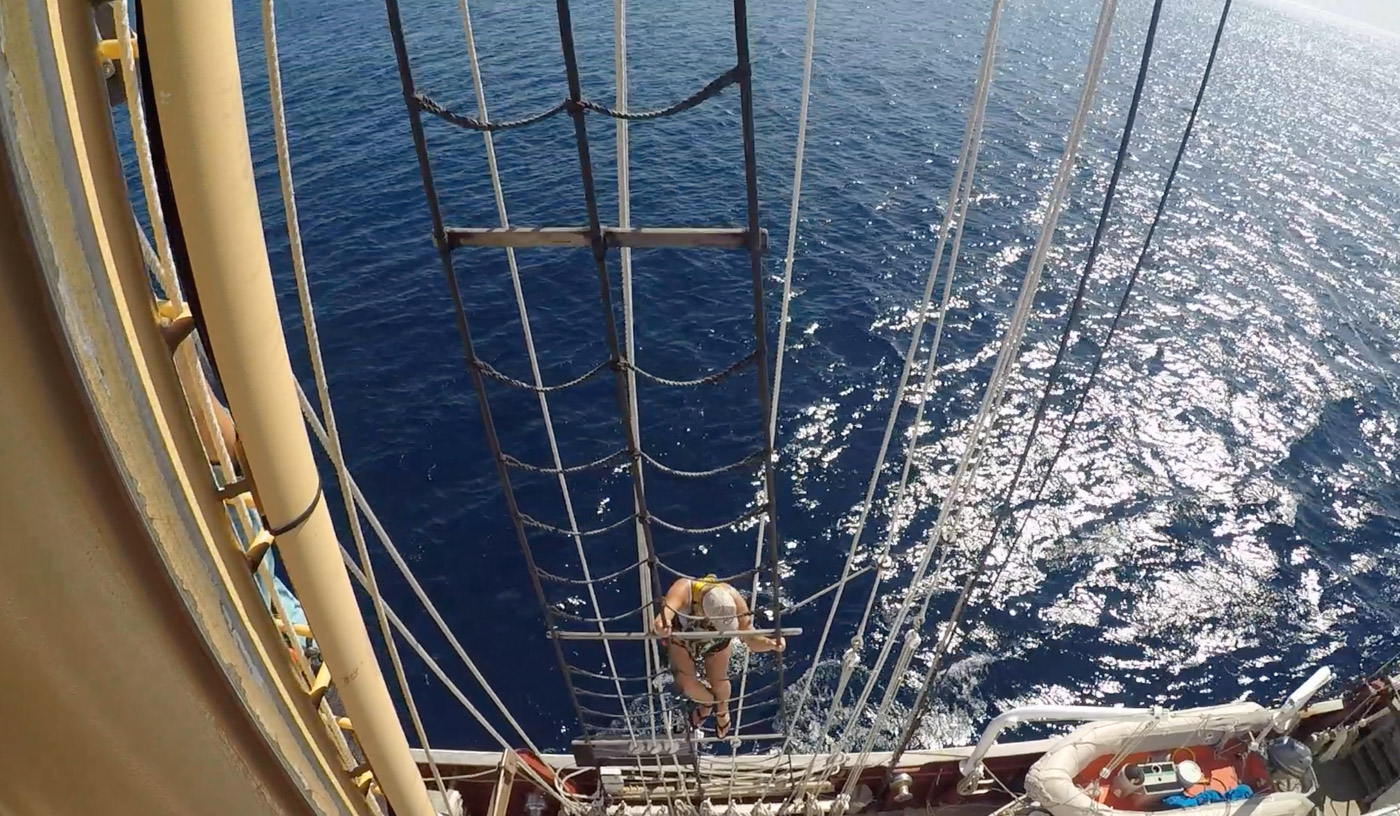 “Dear old world, you are very lovely, and I am glad to be alive in you.” – Anne of Green Gables, LM Montgomery

My morning today started as many of my mornings here on the Seamans do – with a lovely wakeup from a member of C Watch followed by 10 minutes of internal wrestling to convince myself to wake up. After a nice oatmeal breakfast, I headed up to deck to begin morning watch. The second I stepped through the doghouse doors onto the quarterdeck into the soft morning sun, all my qualms about being tired melted away like butter on a piece of Sabrina’s freshly baked bread. It was such a spectacular morning.

The sun was low and radiated a soft golden glow through the otherwise robin’s egg sky (apologies to the Cloud Appreciation Society, but nothing makes me fill with joy faster than a perfect blue-sky day every now and then). Winds were light and the persistent Pacific swell that so often turns my stomach instead manifested itself in one-foot waves that gently lapped our hull. The morning was beautiful, yes, but it was more than just the visually pleasing seascape that made it special. I don’t know what it was, but at 6:48 this morning, standing on the quarterdeck, I was so ignited with energy and love for life, I knew this day was bound to be wonderful. 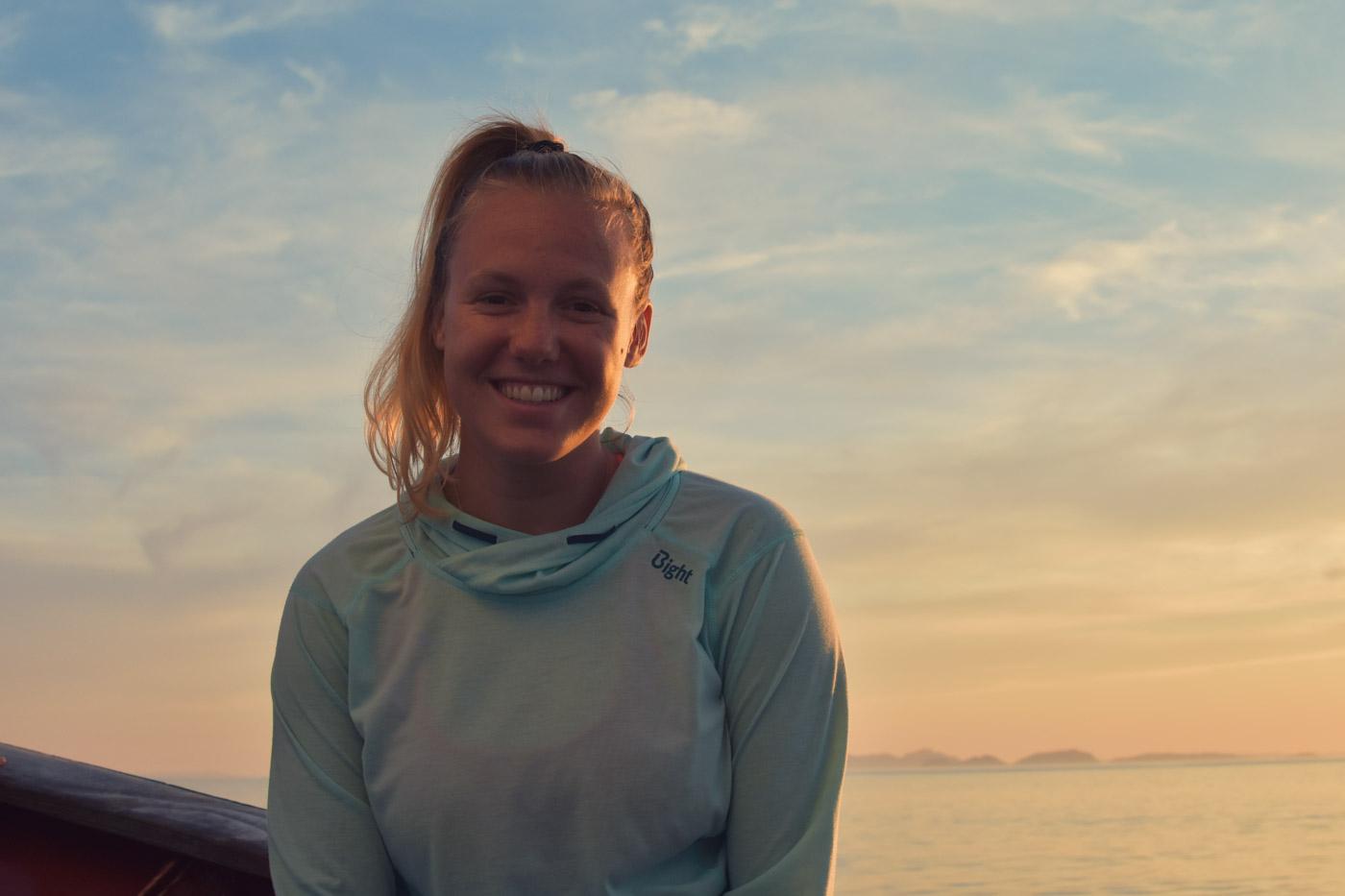 Feeling filled with joy as the sun sets on my perfect day!

I immediately volunteered to start off watch at lookout to revel in the glorious morning. Lookout, after all, is my favorite place to watch the waves, sing a good song, and ponder life. My usual lookout repertoire (the entire Les Misérables songbook) was too somber for the bright day I was enjoying, so I found myself turning to my thoughts instead. I found myself reflecting a lot on the ways in which this trip has surprised me. Despite everyone telling me to go into the trip without expectations, I couldn’t help but conjure up visions of grand adventures in ports and seas more foreign and far from home than I’d ever been before. In some ways, these visions manifested into reality, meeting and oftentimes exceeding my expectations. But I also faced challenges I was not expecting. In my head I knew seasickness would be an inevitable challenge for perhaps the first few weeks, but I was not prepared for how thoroughly it would affect me physically, mentally, and emotionally on every leg of our voyage. I had days where I did not want to be on the ship, and every so often I found myself longing for my bed at home and a long, hot shower. At first, I felt ashamed, but now I realized that’s a normal part of being human. Life changed when we stepped aboard the Seamans, but it is still life, with its ups and downs, and these experiences are what help us grow and persist.

Shortly into our watch, I spotted a faint island on the horizon. I didn’t cry land ho at first, because I wasn’t even sure that what I was seeing was there (you can only stare at an endless empty horizon for so long before your brain starts making things up). But once I heard joyful cries of “land ho!” from the quarterdeck, I too felt adrenaline rush through my veins as I stared at the first land we could see after two weeks at sea. The bubbles of initial excitement remained but slowly fizzed out as a new emotion crept in – bittersweet sadness. I was happy to see land, but with it came the knowledge that our voyage was quickly approaching its end. Instead of watching the land ahead, I found the urge to turn around to the endless expanse of ocean behind me.

Suddenly, a flood of emotions rushed over me like a breaking wave and I felt teary-eyed. I felt unfiltered joy and bittersweet sorrow all at once. I felt proud – proud of the entire Seamans crew, proud of my fellow classmates, and proud of myself. But mostly I felt grateful. My brain knew I was in the South Pacific, but for a second that calm seascape in front of me could have been the Long Island Sound that I stared at endlessly from shore for twenty years of my life, daydreaming of the day I could go out there and just keep chasing the horizon. I’m so grateful to my parents and family, for allowing me to take my dreams beyond home and across the world, and for all the other mentors in my life who helped me along the way.

I guess if this lookout ramble has any takeaways to it I’d suppose it would be to approach every day with gratitude and intention, for the best days manifest not from grand adventures but from an accumulation of simple, beautiful pleasures that you allow yourself time to truly appreciate.

Love to my family always, talk to you soon!

Signing off for the last time (for now) from the Big Blue,