You’ve Got A Friend in Me 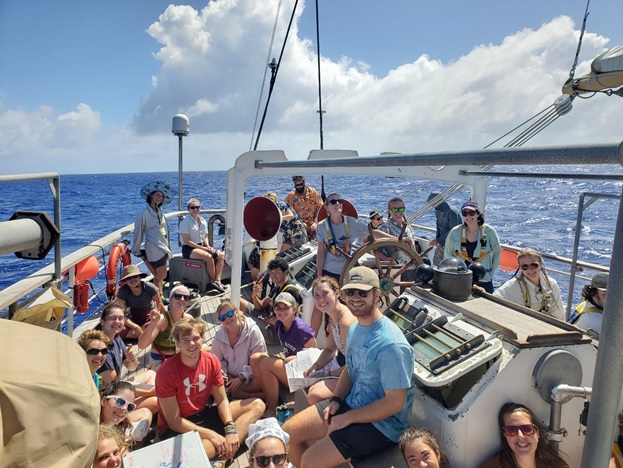 A standard day in class with students and crew.

Hello Outside World! I haven’t written one of these yet, so I think it would be proper to introduce myself first. My full name is Benjamin Patrick Pham, but I usually go by Ben as indicated above. I’m from a suburb of Chicago but I go to school in Minnesota. So obviously the first chance I got, I decided to avoid the Minnesotan winter and embark on a journey of Pacific proportions.

If you are reading this, likely you know someone on the ship. And that person is magnificent and incredible. You may be asking how I can be talking of the person you’re thinking of. Well, fortunately, I can make that general assumption because for every person on this ship, I have some form of respect and admiration for. This crew and student groups are some of the kindest and hard-working combination of people I have ever met, making this journey so memorable for me. So, thank you for being a part of that person’s life and getting them to a point where I can get to know / sail with them.

Specific shoutout to Abby Murray’s family today! It’s her 21st  birthday today and I snatched up the blog date. So, I promised to deliver a message from her. She loves and misses you guys so much! And she’s super excited to come back home and share her experiences with you all.

There are many ways I imagined this momentous occasion. Being in the middle of the Pacific Ocean was not particularly one of them. However, the wonderful company of the ship has made it a special one with plenty of songs and treats. Even being away from home, I still feel like I have another family right here with me. I really appreciate all the heartfelt, celebratory “Happy Birthday” messages. So, thank you S-302 for a likely more memorable birthday, literally and metaphorically, than I otherwise would have had.

In honor of my thanks, I decided to replicate a common activity that has become popularized on the ship: comparisons of people to various characters / objects. I think the world deserves to know how I see the members of this ship. And without film at my disposable (except for Point Break on Palmyra), I’ve been thinking a lot about movies I want to watch. So, the vehicle for my comparisons will be…….drumroll please………Toy Story! I’d say it’s a close to a universal movie because it’s so good. If you have not seen it, I am happy to lend the VHS version of the first and second movies I have in my basement. Personally, Toy Story 2 is my favorite one for reference.

Starting from the top, obviously, Captain Allison is Woody. The sheriff and the captain both equally share the responsibility of their crew and is always looking out to make decisions to benefit everyone. Fearless leaders and all. Next up, our Chief Scientist, Hillary, reminds me of Buzz Lightyear. His iconic phrase ,“To Infinity and Beyond”, rings true with Hillary’s passion for science. She leads us into the great scientific unknown of the ocean the same way Buzz originally search for his place in the world. I feel inspired every time we talked about science to go out to perform an entire research project alone.

My original mate and scientist combo of Sara and Corinna have a very strong Mr. and Mrs. Potato Head dynamic going on. Sara is hyperfocused on what to do next for the ship in the same way Mr. Potato Head seems to be one tracked minded. They can be forgetful sometimes, but they are both supported by an amazing partner. Corinna and Mrs. Potato Head just enjoy the company of their respective partners and are always helping them when they need it.

Chief First Mate Kevin “Kev-O” Murray clearly is a Bullseye. They are both ready to go at a second’s notice and quick to get things done. Reliable as the sun rising from the east. Okay, this one is going to be a stretch, but Third Mate Tierney reminds me of pre-“turns out he’s evil” Lasso Bear. He first appears as a super welcoming and kind figure in the day care before the whole twist. Tierney has had the same energy the entire time I’ve been on the ship. And I’m pretty sure she’s not secretly evil.

For the scientist side of things, Anna is reminiscent of Slinky. She always helping all over the place and stretching herself similar to the literal stretching Slinky does. And for Amy, she has a little Martian vibe in that she always seems interested to see something cool in lab. It reminds me of the way the Martians looked at the CLAW when we find something cool in the 100 counts.

In the deepest parts of the ship, the engineering room, lie our two trusty engineers, Henry and Nolan. Henry, to no surprise of anyone on this ship, is a Rex. Both are these large, imposing figures with hearts of literal gold and sweetness. His counterpart, Nolan, has a strong presence of Piggy (Pork?

Porky? No Wikipedia for character names and a reliance on my own memory is failing me but you get the idea) in that they both always have something funny to add onto a conversation.

The stewards, or as I like to call them the boat’s lifeline, are Cat and Gracie. I couldn’t decide which I thought reminded me more of Jessie, so I’ve made the executive decision to make them both Jessie. I think they keep the whole group together in the same way Jessie is the glue of the toy group. Though I don’t quite know that Jessie could match their cooking and baking levels.

Finally, there is our class TA Audrey who has been with us since on shore.

She’s never been sailing before which makes her a shoo-in for the new Spoon character from Toy Story 4. They’re a new addition into the franchise but a welcomed one at that. As for the students, we’re all just various green soldier toys doing all the grunt work on the ship. Oh, and the ship. The Robert C. Seamans, or Bobby Sea for short, is the majestic vessel we preside on is obviously Andy. We are simply all the toys that the ship plays with.

It’s Bobby Sea’s world and we’re just living in it.

As for my “non-boat” family, I don’t quite remember if I mentioned the existence of this blog to anyone. I could be shouting into the abyss, but I can always show this post later. Just in case, I miss you all so much! To Mom, Dad, Emma, Megan, and Dougie Fresh, I know ya’ll wish me a Happy Birthday (hopefully you guys remember) and I can’t wait to see you again. I got plenty of stories and photos to share when I get back. Love you guys!

Same goes for any friends or other family members that somehow magically discovered this post.