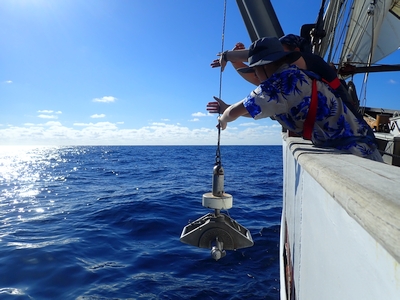 Phoenix (A watch) "dances" on a wire deployment of the Shipek grab, which was deployed to over 200m depth and snapped shut on the sea floor, bringing back a sediment sample that we can sieve to learn about the geology we're sailing over, or maybe even find some cool fossils!

At this point, everyone onboard knows the science report song, a tantalizing snippet of which is the title of this blog post. It's a catchy song, catchy enough to get stuck in your head on lookout, really short and to the point. It's one of a million little things that you just kind of get used to, absorb by accident, when you live on this boat. And oh boy, I do mean a MILLION things. 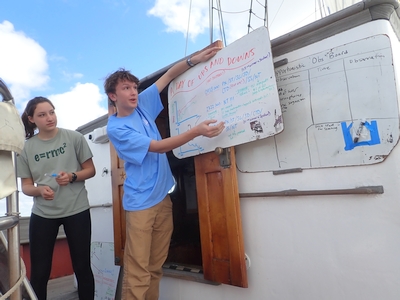 Steph and Brier (C watch) give the daily science report, showing how oceanographic parameters such as temperature, salinity, and chlorophyll-a have changed over the past 24 hours. Today, we may be sailing through an eddy of the Gulf Stream, bringing warm waters and Sargassum farther north than usual!

There is SO much to learn when you first step onboard the Cramer, and we ask students to learn it pretty much all at once. It can be overwhelming, and the first few days feel very much like "drinking from a fire hose" as Captain Allison put it.

I was a student with SEA myself, and I remember the panic of the first 48 hours underway-where exactly in my overstuffed, saturated (not to mention seasick!) brain was I supposed to find space for the three different sets of tweezers in the lab, which all have different functions?! Or another new knot? Or the lyrics (such as they are) of a silly science report song? There is nothing like sailing, nothing remotely similar to the skills we're putting to use here (except maybe other different types of sailing). And the same generally goes for shipboard science-all the lab experience in the world isn't going to prepare you to pipette your sample when the ship is pitching 30 degrees in either direction.

Even the most hands-on classroom science won't teach you to tie bowline knots in the pitch black, which is a surprisingly big part of lab watch.

But this complete immersion in the brand new world of the Cramer brings something miraculous-bit by unannounced bit, everyone settles into this new routine, new community, and new home. There's an excitement in the air about finally being really out to sea, which partially comes from feeling more comfortable and familiar in this new watchstanding role.

We said goodbye to land back at Block Island wind farm, and now we're headed off the continental shelf and into deeper waters, a really exciting feeling! For a while now, it's been water to the horizon on all sides, which is a view we'll get used to eventually but right now is still gloriously shocking, not to mention beautiful. 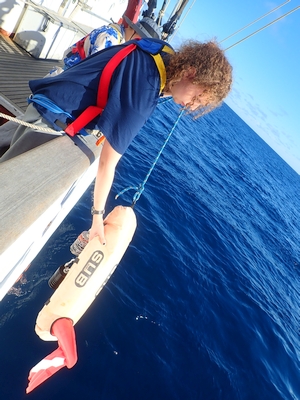 Alec (A watch) deploys Pete the UNICORN, a new lab mascot! Pete the UNICORN gallops alongside our ship with "legs" made of four different materials-wood, rubber, cloth, and plastic, in order to better understand what can and does grow on different substrates present in the ocean.

In other exciting news, today's evening watch was punctuated by some VERY charismatic megafauna! During class time we did rotation stations with some lab watch trainings, and after class nearly everyone stuck around on deck to enjoy the beautiful sunny weather. This was lucky because soon, the lookout spotted a whale spout very near our boat, just a point or two off the port bow! Everyone who was below rushed on deck for the first real, close whale sighting of the trip, and were admiring the three whales frolicking a ship's length or so away from us, when the next call came-"dolphins off the starboard bow!"

For about 10 or 15 breathless minutes, nearly the entire ship's company watched the whales and a pod of about 10 dolphins, walking back and forth across the deck for the best view of each, gasping when we saw a whale fluke or a dolphin leap out of the water, generally very impressed with the show. Up close encounters with whales and dolphins as the sun sets on a huge, wide water world-what could be better?