A Visit from King Neptune’s Court 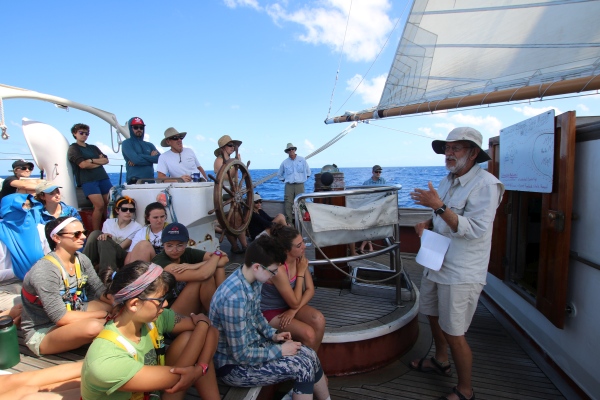 Weather
Hot on deck and stiflingly sweltering in bunks (26-29°C), currently raining but clear with few clouds until recently. Winds and seas generally from the southeast, breeze is lightening up.

More than a day has passed after parting ways with Port Antonio, during which we have transitioned back to life underway. While routine tasks, meals, and watch schedules continue, the elements, conditions, and circumstances of every moment mean life on board is always engaging. Getting complacent is not an option­. As crew members on the Cramer, students are responsible for understanding the ship and handling it safely and effectively, keeping our minds and hands moving. Every moment is different, requiring active and efficient observation, decision-making, and actions. 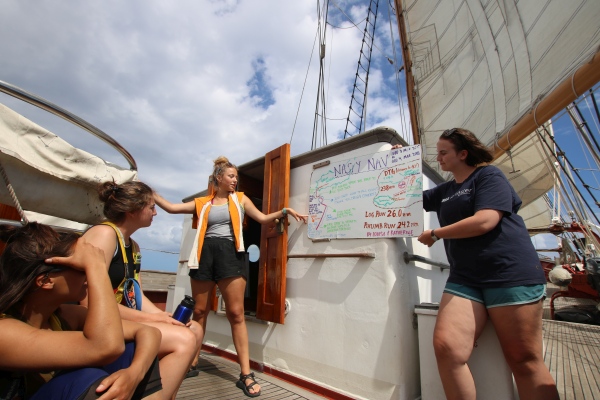 Me (Louisa) and Katherine give the navigation report after standing morning watch.
Ship's Log

Getting under way was a busy and exciting all-hands undertaking. Before setting the main, only one step in the process of getting underway, we shook out the reef we had been sailing with since embarking from San Juan. Reefing the main essentially shortens it, decreasing its surface area and thus limiting its power. It was particularly exciting to shake out the reef and set the main, seeing the entire mains'l for the very first time. Its grandeur is not only felt in seeing it, but also feeling it: setting it took more hands because of its immense weight, and we quickly picked up speed, hitting 10 knots.

Last night I had midwatch, and somehow managed to wake up for breakfast (delicious scones, thanks Ger!). I have gained the reputation of being one of the heavier sleepers on board, somehow managing to sleep through breakfast after midwatch even though I have a bunk in the main salon, a space where people eat and thus tends to be lively and loud during meals. I returned to sleep after indulging in breakfast and felt well-nourished and rested for watch at 1300.

Watch was busy. On top of sail handling, boat checks, and dip-net processing, one happening stands out. Class, as usual, was held at 1430 and centered on a very pressing issue on board the Cramer that reflects perhaps a bit of complacency among us: gear adrift. As we learned on shore, spaces on boats tend to be very defined, and the Cramer is no exception. There are many diagrams on board that map out certain spatial aspects of the ship: from locations of fire extinguishers, to food and cleaning supplies (stored throughout the ship under bunks and benches), to sleeping spaces (our bunks and cabins). The bunk diagram is key to the concept of "gear adrift": personal belongings must be contained in each respective bunk. Recent rainy conditions in Jamaica, snorkel gear left out after our snorkel survey, and the rising level of feeling ownership over the ship had resulted in a tremendous amount of personal items spread about on deck and down below.

After announcements, some informational tidbits from Gary (our resident bird expert) and Rick (Cramer's new artist replacing Peter), and the navigation, weather, and science reports, King Neptune's Court, played by watch officers, scientists, and Ger, appeared in extravagant sparkly garb, a banana costume, and an octopus cape to rectify the pressing issue. Neptune's Court led the show, going through each item, one by one, as students danced, sung, and told jokes to get back their belongings. The show included Maya's tap-dancing, Natalia and Teahelahn's version of the cup song, the "boat check song" created by Aidan on watch, several jokes, dance moves, a couple camp songs "boom chicka boom" and "hey, burrito," among many other acts. Claire and I tag-teamed "hey, burrito" because we have the same rash guard, one of which was left on deck. Surely, less gear will be left adrift after King Neptune's Court appeared today to lead the light-hearted yet embarrassing show. The ship certainly looks better now with gear stowed away. And yes, even costumes have a storage space on the Cramer: under Gary's bunk.

P.S. Hey Isabel, True, Mom, Dad, Sue, and the rest of you! Thanks for your support, you're the best and I miss you.