Exploring the Bay of Islands 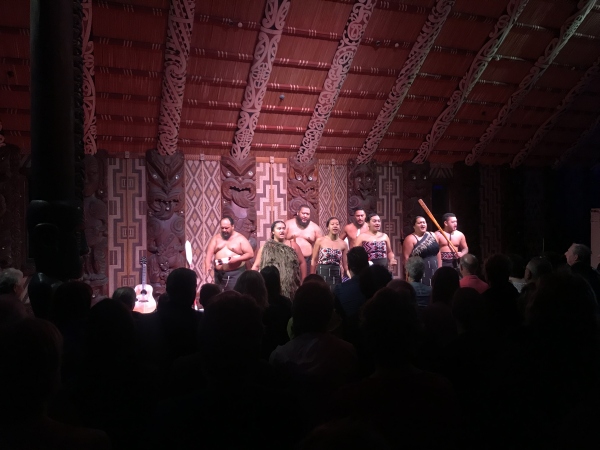 Performance from Nga Puhi singers and warriors for us audience members in their marae or community center.

Weather
Thick layers of puffy stratocumulus cover the sky with stratus behind that cover the entirety of the sky. Precipitation is on and off. SWxS winds blow softly at a Beaufort force of 1. Seas are very calm in the bay with waves around 1’ or less.

Finally having a full day in port after a long week of learning the ropes (pun), the crew was ready to fill our one full day in the Bay of Islands with as much as we could before setting off on the long journey to Wellington. The day was to be separated into three main activities; a tour of the Waitangi Treaty Grounds, “research time,” and dinner back aboard the Robert C. Seamans with important guests that were friends of Professor Jeff Wescott.

We got things off early with an 0600 wake up for an early breakfast which was followed by clean up, the packing of lunches, and gathering of other supplies that may be needed in our longest trip apart from the boat since Auckland. Unfortunately, there was some light precipitation that would persist throughout that day, but this did not stop us from taking one boat into Russell, a ferry into the small town of Paihia, and a short walk up to the Waitangi Treaty Grounds. As we were waiting on one of our boats, we were lucky enough to see a couple of dolphins who swam around our boat before disappearing into the rainy bay.

Short backstory: the Treaty of Waitangi is the initial agreement between the British and Māori people, the indigenous peoples of New Zealand, which officially incorporated New Zealand into the British Empire over the likes of the French other western nations eager to gain sovereignty over the Pacific land. The Treaty immediately became controversial and remains to this day as it guaranteed Māori land rights along with other promises which were quickly broken in the following years. However, the Waitangi Treaty Grounds are today managed by the Nga Puhi tribe who give tours, retell history, and manage the land and traditions.

Rehu, a Nga Puhi woman, was our tour guide and she walked us through the importance of genealogy in Māori culture, the history of the lands of Waitangi, and the effects of the Treaty. We also were shown the great waka taua (war canoe) named Ngatokimatawhaorua, which is the world’s largest at 35m long and 6 tons when dry. We then were given a performance by Nga Puhi performers who sang us a number beautiful songs and then demonstrated uses of important Māori objects such as the mere, a hand to hand combat weapon, the poi, a ball attached to a string used in song to make rhythmic beats, and the taiaha, which is a spear with a club on the end traditionally used as an army weapon and in martial arts. Each of the elements of this tour gave us a lot to think about as we continue in our anthropological projects.

After the tour, I was lucky enough to sit down with a Māori chef as my project is on traditional Māori food preparations. The chef, Caleb, walked me and Jeff through his knowledge of cooking with the hangi which is the traditional Māori earth oven. He then treated both me and Jeff to free meals prepared that day from the hangi. He gave us a delicious plate of slow roasted chicken and pork with vegetables and it reminded me that researching food is always a great idea.

I then rejoined my classmates on a trip to Long Beach in Russell as part of our “research time”. We swam in the popular beach for a while before heading back into town where the dairy-free members of our group got sorbet while the rest got ice cream. We then took a trip back to the Seamans ending our time on shore.

Back on ship, our stewards Natalie and Sophie made homemade pizza for us and our guests. Jeff invited some friends aboard the ship who were well versed in everything from anthropology to oceanography. I talked with Tracey, a Māori woman who shared with me experiences from her childhood about the importance of food in her family life to help my research project. After thanking our guests, we took time to decompress after a busy day, ready to get back into the routine of life at sea. We thanked everyone in and around the area of Russell who took time to talk with us today. But now, we are ready for Wellington.

To Mom and Dad, I’m very excited to be here and everyday has been incredible. To Meghan, I’m looking forward to hiking mountains with you rather than hiking up and down the deck. And to Kahla, I’ll see you soon.