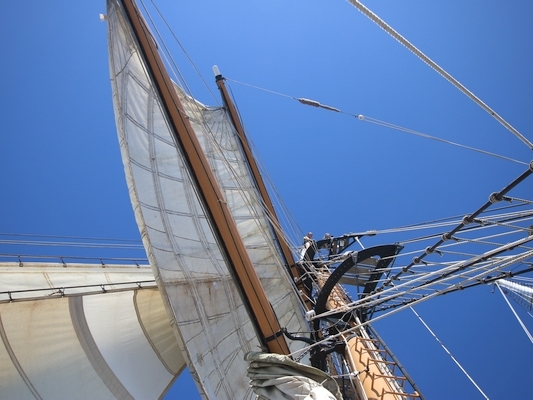 Hello to everyone reading our blogs! This is Emily Benson and Nathan Ruel, two students aboard the Cramer as part of the C-301 class. We are here to discuss our Oceans and Public Policy brief and how we applied that to the Caribbean during our stay as we met with marine park officials and scientists, learned more about the current status of the US Virgin Islands, and created our own human census data to draw more conclusions.

For our policy brief, we decided to focus on marine protected areas in the USVI, particularly no-take zones. Overfishing from both commercial and recreational fishing vessels have caused detrimental effects to the coral reef ecosystems. It has driven many keystone species to near extinction. With these drastic declines in populations, the ecosystem shifts, potentially in ways that are unsustainable and cause the reefs to collapse. We discussed the benefits of No Take Zones (NTZs), such as increases in endangered species numbers and improvements in the fishing industry, and how implementing more of these around the Caribbean would help to save the coral reef ecosystems. We also took into consideration stakeholder voices during the process by emphasizing how important it is to take local communities, fishers, and indigenous groups’ opinions into consideration, making them the backbone of the implementation of these policies.

After our time in Woods Hole, we went to St. Croix to talk to locals, scientists, and the policymakers themselves about marine protected areas in the USVI. We talked with Matt and Caroline, two policymakers at the East End Marine Park. They told us about the state of no-take zones at St. Croix. Currently, marine protected areas are all around the island, but the no-take zones are located exclusively on the shallower shoreline areas. Matt explained that this comes with some backlash from the locals habituated on those shorelines, due to the demand for recreational fishing, swimming, and general utilization of the area’s resources—many people are not willing to give that up for the sake of wildlife preservation. What Matt told us didn’t completely surprise us, but it did heighten the fact that it is extremely difficult to have the full support of every stakeholder group in policies like this that may alter their lifestyles.

Caroline also emphasized one important struggle of the policy-making process. Many of these types of policies, including MPAs and NTZs, tend to be more reactive rather than preventative. This means instead of creating policies that prevent, for example, a reef site from human exploitation, these policies are created after the measure of exploitation has already grown to concerning levels. Many people do not see the point of creating these policies when there is nothing seemingly wrong in the present and refuse to acknowledge or are unaware of any future consequences. For example, when the whale population had declined to almost extinction in the 20th century due to overfishing, policies were implemented to protect them relatively soon after. However, as this was a very reactive policy, we do not see those population number being restored today. To ensure coral reef fish and other species don’t suffer the same losses, there needs to be a change in the way policies such as MPAs are implemented, although we admit it’s very difficult to do so without backlash from communities affected by NTZs.

During our interviews with those from the East End Marine Park, we came to the conversation of what problems they face. Specifically, the illegal fishing of the protected areas. This is a challenge often faced by MPAs and NTZ, this can happen for a variety of reasons, not all inherently malicious. As was told by Matt and Caroline, the most frequent cases of illegal fishing are because fishermen want to catch bigger fish with more frequency and travel either very close to or into the protected zone. A lot of these fishermen don’t understand the purpose of the MPAs and NTZs and can’t see their importance leading them to disregarding the laws. They also tend to not be too concerned with breaking the law due to the difficulty of enforcement which will be gone into more later.

The other cases of illegal fishing seem to be people who weren’t aware of the presence of an MPA or NTZ. This is likely due to how hard it is to improve public awareness about these zones so many people don’t realize when they’ve entered one. Awareness and understanding about why these zones are set up are a major facet of their protection; the more people know about the problem, the more who avoid harming the area generally.

Problems with outreach and awareness about MPAs and NTZs aside, there is also the problem of enforcement, which was mentioned earlier. Matt and Caroline talked a lot about what they must do when they see someone in the distance engaging in illegal fishing. Often, they rely on spotting with the naked eye which can lead to some missed cases, but it also results in slow reactions. Once it is noticed, they must have someone ready to get on a boat and drive out to engage the person apparently violating MPA fishing rules. This process takes a long time and, in some cases, leads to them getting out there only to find the fishers had already left the scene. It is issues of enforcement like this that make MPAs and NTZs hard to maintain, in an unfortunately harsh tone, regulations can seem “toothless” at times, which leads to others being more likely to disregard the protected zones and fishing regulations. Marine park staff have recently started using new technology to engage in a quicker fashion with users who may be poaching marine resources: they have started using drones. Drones move fast, are quick to start up, and are very discrete, making illegal fishers less likely to try and leave the zone before resource managers have a chance to discuss the situation with them. This use of drones gave the East End Marine Park a quick way of finding and identifying the cases of illegal fishing, allowing enforcement to be greatly improved.

Moving on to the data from the Human Uses of Ocean Spaces Census we collected during our trip, we looked at Francis Bay, St. John, on the fifth of December at 11:56 am. One of the first things we noticed about this area is how many recreational sailing boats and beach goers there are. For a spot with close to 90% undeveloped land, there seems to be a lot of popularity among sailors and swimmers. This is likely because there is a national park protecting the coral reefs and seagrass beds in this location. It helps preserve the beautiful ecosystems and wildlife that attract public tourism.