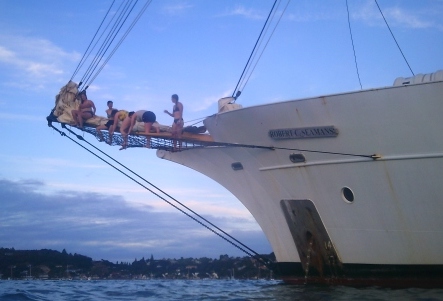 Lining up for swim call

Today marks a week on the boat and the first port stop! As of this morning everyone has fully adjusted thanks to the amazing crew and a finely tuned combination of acclimation and the occasional medication. The weather has also played nice to help us get used to the rocking while underway. This morning as I stood watch from 2200 to 0300 the water was so glassy that it reflected the stars and almost full moon. We stood watch with the captain so our mate could get some much needed extra shut-eye.

Captain Greg doesn’t usually stand watch, so the students created a rotation for lookout, helmsman, boat checks, plotting courses, and recording weather, and then carried out our duties fairly independently over the course of the night. Our ability to more or less organize ourselves during watch is just a testament to how much work everyone has put in to learn the roles and responsibilities while living on the Seamans.

The main event of the night was the meter net tow: sending a net down on our steel line to sample the water column down to 1000 m. We pulled up some amazing nudibranchs, jellyfish, polychaete worms, and bioluminescent salps and dinoflagellates. It’s pretty magical to shake a bucket of organisms and watch it light up with blue flashes.

After being relieved we all went below for mid rat (midnight rations) and slept until our 1100 wake up. Then we got up in time for lunch (quesadillas) and headed back up on deck to take the ship in towards Russell. With our chief mate well rested and at the conn, I took the helm and steered per her direction, doing some close quarters navigation under engine power around small boats and islands (it’s called the Bay of Islands for a reason). We were able to complete a Neuston net deployment and get back on track towards Russell’s port despite the many sailboats coming a bit too close for comfort to take a look at our beautiful ship.

Once we anchored in Russell and ate dinner the captain decided it was calm enough to go swimming! Everyone rushed to the bowsprit to climb up the netting and jump in the water. It was a great chance for everyone to completely unwind together after days underway. With a beautiful red sunset in the background, our first week on the Seamans came to close. Here’s to five more weeks of living, learning, and laughing on the other side of the world.