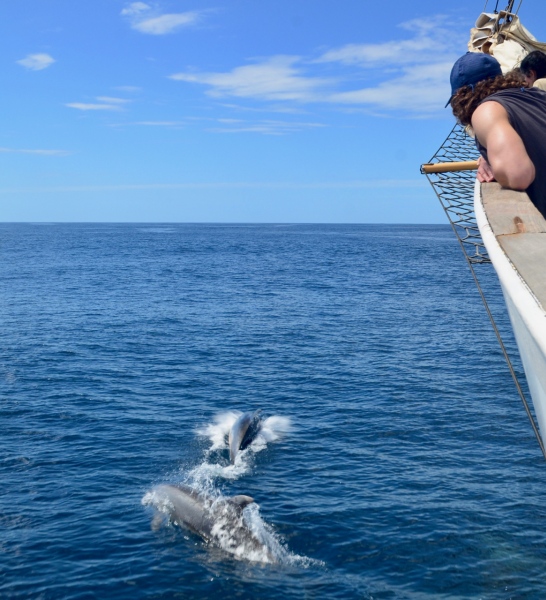 Watching dolphins from the rail aboard the Robert C. Seamans.

When I was younger my dad, an alumnus of SEA, would tell my siblings and I one of our favorite bedtime stories. A story about the time when he was at watch on the quarter deck of SEA's Westward somewhere in the Caribbean when something magical happened. In the dead of night, he and the other crew saw two lights approaching the side of the Westward. The lights moved with immense speed and were making a beeline for the vessel. My dad describes the lights as torpedoes, with the Westward as their intended target. As the "torpedoes" reached midships they made a dramatic dive and passed under the ship's keel. Were this lights actually torpedoes? No, they were bottlenose dolphin illuminated by bioluminescent plankton, simply hoping to play in the ship's wake.

When I applied to SEA Semester and subsequently was accepted, my dad's bedtime stories came rushing back. I found myself reliving these tales as if it were I witnessing these "torpedoes" or traveling to far away seas. I would tell myself to cherish these memories as exactly what they were, bed time stories, for if I were to imagine them as some fantastic reality I would let myself down when they failed to materialize on my own SEA voyage.

Fast forward to Tuesday, February 18th at 2330, off the south side of New Zealand's Great Barrier Island in the Hauraki Gulf. A watch (my assigned watch) is on watch, and I have been tasked with a boat check: a routine sweep of the vessel looking for any oddities or peculiarities. Part of this check involves going down to the engine room and recording values for a variety of instruments and gauges. On my way back up from the control room, Annabel, one of the other's assigned to A watch, came rushing down to get me. "You need to come see this, there are dolphins." As we got back on deck, the first thing I noticed was the glow of our wake and the illumination of every wave crest. The amount of bioluminescence around us was immense. As Annabel rushed us over to the port bow I could not believe what was beneath us. Surfing in our bow wake were 5 to 6 dolphins, playing, and making passes back and forth in front of the Robert C Seamans. They moved effortlessly through the water as if they were soaring and if you listened closely you could hear their song like calls. Their movements resembled that of mermaids and accompanied with their singing and glowing aura, the resemblance was
uncanny.

While we were watching the dolphins sway back and forth and play beneath our ship, my dad's experience of bioluminescence dolphin came back. I no longer had to imagine myself in my dad's story to experience such an amazing spectacle, I had witnessed it firsthand. However, instead of seeing glowing torpedoes in the Caribbean, I saw seeing mermaids in the Hauraki Gulf. One of the things I wanted to take away from SEA was bed time stories of my own. Two nights in, I already had one to best my dad's.