Time Well Spent Out on the SSV Cramer 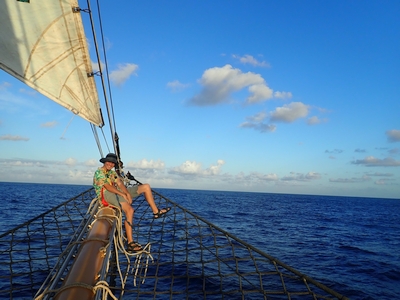 Phoenix gets cozy on the bowsprit ready to watch the sunset.

Family, friends, family of friends and all other avid C-300 SSV Corwith Cramer blog followers - hello all and thank you for coming along for the ride. These past few weeks have been some of the most action packed weeks of my life.

When functioning on a 72 hour circadian cycle rather than a 24 hour one, time doesn’t seem to behave the way one would expect and the hours in the day seem to disappear all too quickly, except of course at 2 am, an hour into dawn watch, when you’ve already jigged up the jib and trimmed all the sheets and your standing out on lookout for the next hour realizing you still have 5 more hours to go. 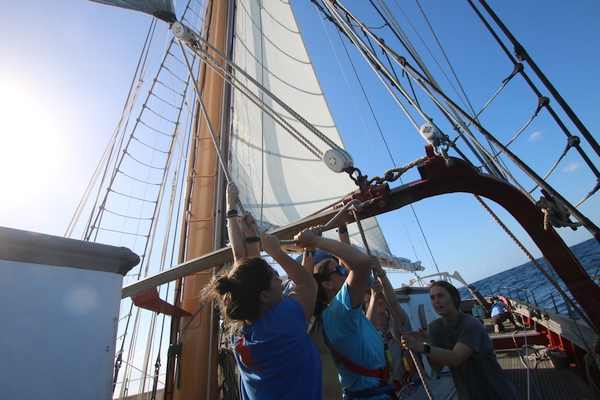 Anna, Aleea, Jenna and Jordan haul away at the mainstays’l sheet

But that’s not how my day started, that’s how it ended, so in lieu of time being backwards and feeling both faster and slower at the same time, let me take you to the beginning of my day, when I received a 6 am wake-up for my 0700-1300 morning watch, enjoyed probably one of the best breakfasts I’ve ever had of biscuits and gravy (shout out to the ever-talented galley crew, Will and Shelby) and was at the helm ‘steering’ under the motor engine as we tried to make some headway south through the low wind conditions on the other side of the gale force winds we had just encountered a few days ago.

I air quote ‘steering’ because the motor power and smooth seas meant that all I had to do was let Cramer steer herself as I sat back and kept an eye on the compass to make sure she was sticking to the course ordered at 185. I stood there, kept company by Gideon our sea gull friend who was manning the aft look out for a few hours (although he was a pretty poor lookout and I even caught him sitting on the job a few times). We’ve had a few avian passengers join and leave us throughout our voyage so far, but Gideon has been one of the hottest bachelors yet with many people split on how they stand with him - some like him, some want nothing to do with him, some feel like they are Gideon, and the realists among us point out that he will die regardless of our opinions towards him. There’s also quite some debate about his assumed alias but this is my blog post so for sake of ease and settling arguments - his name is Gideon. 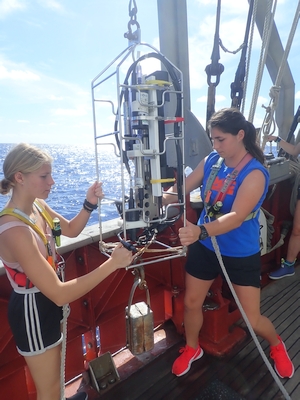 Jordan and Paige deploy the CTD during the morning station deployment.

At 1000 I assumed the role of “the shadow” which is a new concept we have begun to explore as we enter our second phase of the sea component. As “the shadow” I am in charge of managing the rotation of my deck crew and making sure all of our duties get fulfilled, including hourly boat checks and weather observations along with other odd jobs such as plotting local apparent noon (LAN) for the day and keeping track of the deployments of science equipment when we are doing science. We had a very fun and successful science day as we took a little detour into some windrows to collect plastics and sargassum and plastics in sargassum. On deck we had to standby at the helm and sails to maneuver our ship into the windrow while lookouts called out where we were heading and the science crew stood by with dip nets and cameras, ready to capture as much data as we could.

Overall, one of the most fun watches I’ve had yet, although that’s subject to change because I find myself saying that after almost every watch. After spending class today talking with my research partner, Paige, and my project mentor, Jordan, to work out the last kinks in my project plan and finally start the tedious and ever-daunting task of data entry, I ended my day 40 ft above the water hanging aloft from the foremast with good friends, Brier and Zuza, who had finally overcome her fear of heights (at least for now – we’re working our way up to the second platform which is another 20 feet higher).

I stood there, as the sun dipped closer to the horizon, watching Megan, Paige and Stephanie tangled together in laughter, heads rolled back to the opposite end of the labtop, Rocky at the helm swinging the spokes of the wheel around while belly-laughing with a group of B watch crew members manning the afternoon deck, Captain Allison sticking tightly to her SMART goals and getting in her 15 minutes of daily exercise out on the quarterdeck alongside Shelby and Will, pushing away at the quarterdeck floor over and over again, getting in their push-ups for every nautical mile (we’re at 1115 nm so far… so a lot of push-ups), Colin strumming along on a ukulele to some series of chords that must’ve come together in a familiar tune as a crowd gathered around to sing along, and various others playing alto recorders and melodicas , and jotting down sentiments in their journals in various corners or the aft deck. I looked up at Gideon perched on the course yard above me, looking down at all of us existing along with and alongside each other, and I felt genuine happiness, happy to know these people and happy to be one of them.

Mom, Dad (and Amy, Heather and Matt if you decide to open the link to this blog post that Mom probably sent in the group chat a while back) I hope that all is well and that you guys are all doing amazing in all your endeavors. I would never ever say it directly to any of your faces but I hope you know that I am so proud of all of you and so happy to have people like you surrounding me in my life. I love and miss you all a lot and can’t wait to catch up and hear all that I have missed while off the grid. Love you guys xoxo P.S. Hey Jordan’s dad smile I just wanted too say your daughter is awesome and has made my life 100x easier as my project mentor with her amazing computer tech wizardry and her hours of data entry and manipulation (and her efforts towards designing the CTD deployment equipment for my project). P.P.S. To the good people tasked with birthing and raising my good friend Brier – he was so grateful for his half birthday wishes. Thank you on his behalf! <3