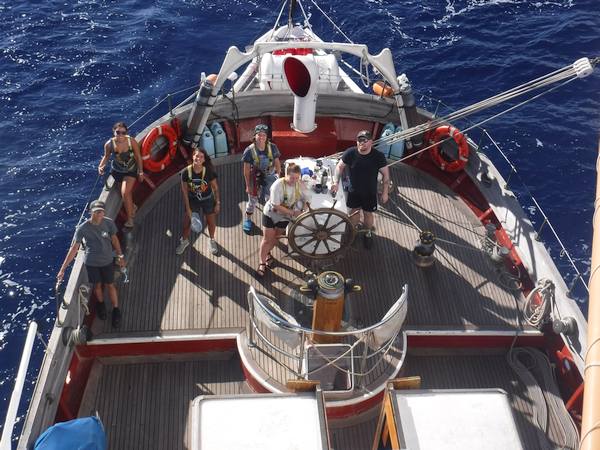 The view from aloft, a quarterdeck full of sailors

Well, here we are, back alongside the dock in Christiansted, St. Croix! It’s been an incredible voyage, as I’m sure you’ll soon be hearing from your loved one when they get home. In the last five weeks we’ve explored the seas from every angle and depth. We’ve sailed over the deepest trench in the Atlantic ocean, sending instruments thousands of feet into another world, and even taking a swim call at its surface. We’ve snorkeled a reef next to an airport landing strip and a reef next to a national park, taking data, taking in the impacts we humans have, taking in the beauty and diversity.

We’ve come face to face with nurse sharks and eagle rays, butterfly fish and parrot fish, urchins and octopus, elkhorn coral and sea fans! We’ve endured squalls and doldrums, honed our skills as mariners, and learned to work together as a team to sail our good ship, following in the footsteps of millennia of sailors before us. 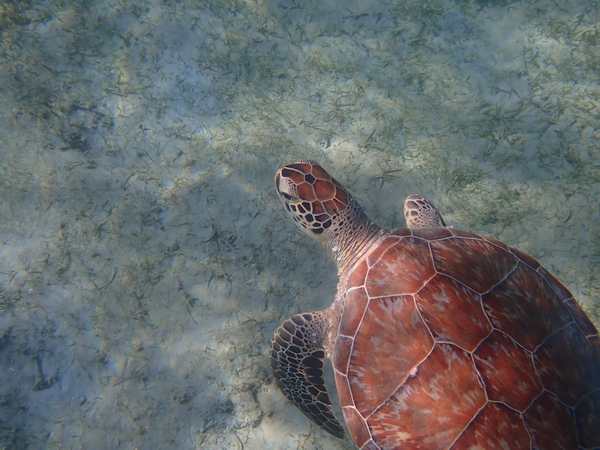 A sea turtle encountered on our final day below the surface

It’s a lot to process and reflect on! But we’re not quite there yet! Tonight it’s crunch time. Our student crew are busy putting the final touches on their hard earned academic work (due at midnight!), and our professional crew are rushing to finish end of trip reports and ship improvement projects.

Tomorrow we’ll clean the ship from top to bottom, every hand joining in the work. She’s taken such good care of us, at sea and at anchor, it’s the least we can do in return. She’ll be ready for the next crew to take her to sea. We’ll round out our last day together with a long held tradition, Swizzle, sharing the immense creativity this group of humans brings for an evening of fun!

Last night I sat on the quarterdeck, soaking up our final night at anchor before our return to the buzz and light pollution of civilization. The song of crickets and frogs echoed from shore as Cramer swung her bow into a cool breeze. Above a sky full of stars shone down. One of the things I treasure most about going to sea is that you can finally see the thousands of stars that fill the night’s sky, not just the bright constellations we’re familiar with, but the ones usually bleached out by city lights. It gives a sense of scope, of how small we are in the vastness, yet somehow not insignificant.

They say that we know about as much about the deep sea as we do about outer space. Today, on the shortest day of the year, I’m grateful to have witnessed a bit of both with this incredible community of scientists, artists, and sailors.