When We See Whales 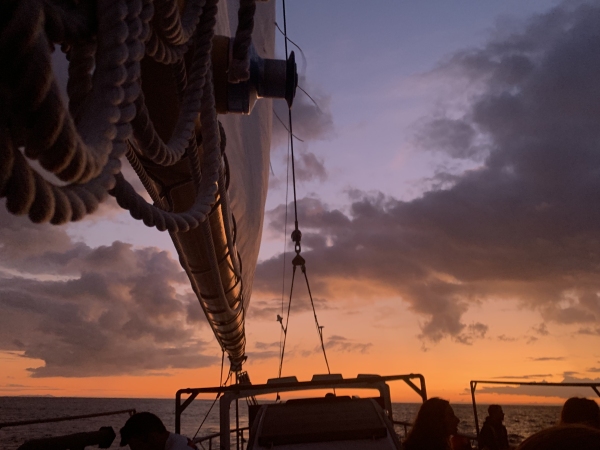 The sun sets over the stern of the Robert C. Seamans, just ten minutes after a pod of whales swam by.

It is so hard to contextualize and transcribe this experience. How do I describe the ephemera of events transpired? The excitement of witnessing a whale breeching at sunset? The feeling of leaning over the bow to watch dolphins at 1:00 AM? These are the thoughts racing my mind as I type this entry while we begin to pull into our anchorage in the small town of Kororareka Russell, our first stop since our departure from Auckland roughly four days ago. Looking through the porthole of my bunk, I can just begin to decode the coastline. The definite lines of the houses and buildings materialize from the lush, dense forest background among which they are nestled. The soft yellow sand rises from above the choppy waves that we left behind since pulling into this more protected bay. It is hard to believe that we have only been sailing for four days, much less that I have been in Aotearoa New Zealand for just a week, as due to the abundance of activities that have taken place, it feels like we have been here for much longer.

One aspect of Aotearoa New Zealand's waters that have especially astonished me are the numerous cetaceans that have crossed our ship's trajectory. Just yesterday, I was lying in my bunk, situating myself in a strategic position that would minimize my roll among the large swells we were experiencing when I heard a shout from above deck. This was quickly followed by a "Look! There's another one!" So, I jumped out of my bunk and sprinted up the ladder to the quarterdeck above me, just in time to see the misty, columnar plume of a whale spout appear off our port side. Just after, another whale surfaced, blowing its own plume and showing off its gray back and arched fin. We watched the pod of whales pass by for roughly twenty minutes, all standing in awe along our port side railing. As the whales turned course and began to fade into the distant sunset, we bid them goodbye and quickly began working to determine their species using a cetacean guide from our ship's library. While we couldn't make a concrete conclusion, we deduced that they were likely Bryde's or Sei whales, both of which are common around coastal Aotearoa New Zealand and have a similarly shaped fin and spout.

It has been amazing to have such great success with large marine organism sightings this early in the trip. The day before the whale sightings, one group on watch during the evening saw a hammerhead pass by a phytoplankton net tow. Two days before, my night watch group and I saw dolphins swim up next to our bioluminescent-glowing neuston net tow. They then swum under our bow for roughly ten minutes, their graceful bodies highlighted in the electric blue shimmer of bioluminescent organisms as they dove and jumped within our wake. I have found myself continually in awe at these sightings as these colossal creatures seem to appear and traverse with ease through the vast ocean while I stumble and run into walls attempting to walk in particularly choppy conditions. Their size and movements contain an air of grace and controlled power. Just within these few days, I feel like I have already learned and seen so much on this trip, both with relation to Aotearoa New Zealand and its ecosystems, which I have briefly touched on previously and with relation to the practice of sailing and oceanic exploration which I have not even begun to describe.

Last year, I was fortunate to take part in a study abroad program through my school, Carleton College, which went to the South Pacific with a month-long travel through terrestrial Aotearoa New Zealand, so it has been especially intriguing to return and approach Aotearoa New Zealand from an oceanic perspective. I truly cannot wait to see what adventure the rest of this program has in store and I look forward to future conversations, sightings, and excitement with friends that will surely take place aboard the Robert C. Seamans.