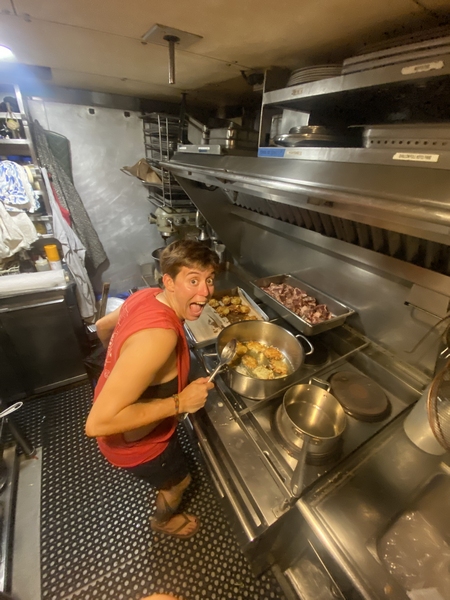 Wind/Weather/Sail Plan
Hove too on a Starboard tack, with the fore and main stays'l set, outside Passe Ngarue Raroia.

Happy Hanukkah to all those who celebrate. Today was our last day anchored off of Raroia. The pass to get in and out of this motu is smaller than others and can have really fast moving tides, so Captain Allison has decided we were going to leave the cut at slack tide which was around noon. Before we left anchor however people got to choose their own adventure. The day before when exploring the town people found out about a Sunday church service and were invited to attend. All but 2 of the students and a lot of the off watch staff decided to go to church. The other two students, Nick and Kamryn joined Sayzie, Jan and Jen on a snorkel adventure and recon mission. Because I was on watch I "had" drive the small boat and got to join them on the adventure. 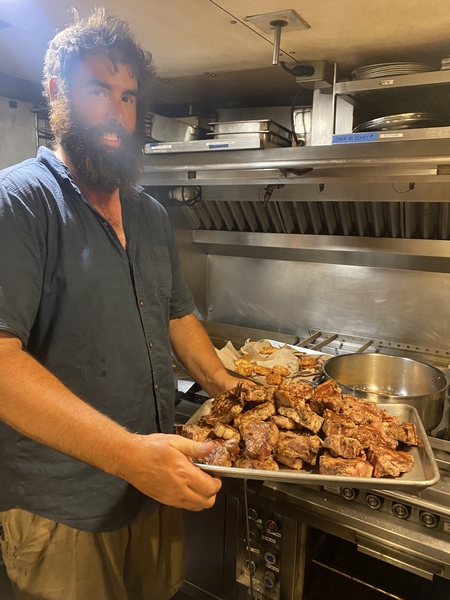 We started our adventure at 10:30 where we left the Seamans in our small boat otherwise named the rescue boat. We headed away from our anchorage which was far down the pass outside of the town.

We first went to explore this fishing trap which was created using rock formations to funnel fish from a small pass outside to a triangle pool inside. It was a way to fish that was used in the past when they were trying to catch a lot of fish to export. That practice is no longer used. We then went on to one of the patch reefs outside the pass.

Here everyone got their gear on and jumped in, I stayed in the small boat and puttered around near them as support. After about 10 minutes Jan came back to the boat and let me jump in. The moment I hit the water I was transported to another world. I looked left and saw 2 black tip reef sharks close buy checking things out, they soon moved on.

(They didn't get that close don't worry mom). I then swam towards the reef where I saw an abundance of life. There were so many fish of all shapes, size, and colors. The coral had minimum bleaching and looked pretty health.

It was a pretty small patch so we were able to swim all the way around it.

From there we headed for the pass. We sat in the middle of the pass assessing the current to report back to the Seamans. In the pass there is a shallow part, we sat on this part with the engine in idle, Jan took the tiller and we all put our heads in the water and observed the coral and life beneath.

The current was flooding meaning it was still coming in so while it didn't look like we were moving that fast on the surface tings were rushing into the lagoon, beneath the surface. After reporting conditions back to the Seamans we went to explore the outside reef. It was nothing like we had ever seen before; there was health coral as far as the eye could see. It was really cool to see it go from deep ocean blue to this slope of so much coral and life. Hear again we saw healthy coral, many fish and a couple of sharks, black tip and white tip reef sharks. After a quick dip I switched with Jan again so he could get a chance to explore. We had heard that dolphins were in the area so I was keeping an eye out, and as soon as Seamans came through the pass a pod of dolphins started making its way towards me in the small boat. I signaled to the snorkelers who came back to the boat and we saw some dolphins as we headed back to the Seamans.

The rest of the day was spent getting everyone a chance to see the outside reef. We did a bunch of snorkel runs from the Seamans while she was hove to, meaning while she drifted down wind. I went on the first one again, with Spatch, Jen, Jan and the students, this time I was in the water the whole time. Once again the view took my breath away. My favorite part of this snorkel was the sharks. Early in there was a black tip who was very curious, we kept circling and followed us for a bit, but we kept an eye on him and kept snorkeling with the current. Clearly he wasn't happy there were people checking out his home. Once we got far enough away he left us alone. Towards the end of the snorkel I saw a white tip playing in the current. He'd swim up current and then drift down. I heard about sharks doing this to get some rest, or go into a sleep like state because the water is rushing over their gills, but this guy was doing it for shorter periods and looked like he was just having fun, like going down a slide. After about an hour and change we headed back to the Seamans where I had to start dinner.

Being the first night of Hanukkah I wanted to make latkes. I asked Cam and Sayzie our stewards if I could and they asked if I just wanted to make dinner too. I accepted the challenge and with Cam, Henry and Spatch's help we made a Hanukkah meal of Latkes, Lamb with chimichurri sauce, tofu and asparagus. Mom we used 36 ish potatoes, and 8 ish onions. Luckily for me and everyone else our food processor had the grater attachment and I was able to find it. We put on some music and had ourselves a time in the galley. I learned that just because we have a big shallow pot doesn't mean it is the best thing to use. It was great in terms of space but it didn't fit too well on the burner so it wasn't heating the oil properly. Mom there was literally no way to burn these latkes. That being said it also took a lot longer for them to cook. Because of this we had Henry come in and celeb shot the Lab, he and I had looked at it earlier and decided they  were lamb chops, he helped me separate them while I was peeling potatoes and then came back and finished the job. Luckily everyone on board is very nice and wants to eat the latkes because we had to push dinner back 30 minutes but it was worth it. It was a delicious meal and not one latke was left over, these people are savages. Mom you would have been so proud, we even made gluten free ones with cornstarch. The last part of the meal that I almost forgot was crispy potato skins. Trying to make less food waste I took the peelings from the potatoes and added oil, salt, pepper, onion powder, garlic powder, and paprika and baked them until crispy.

Thank you to everyone who helped make the amazing meal and for everyone so enjoyed it. But most of all thanks mom for the recipe and always making us latkes every year, it's a lot of work. Happy Hanukkah!