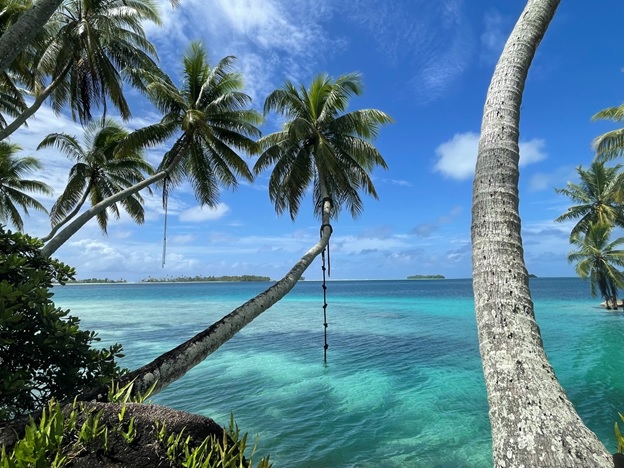 Weather / Wind / Sail Plan
Sunny day on Palmyra Atoll, some brief showers this afternoon. No sail plan as we are alongside for another day or so.

Today is our third day on Palmyra Atoll and it just keeps getting better. A small crew of us woke up early around sunrise to go for a morning row around the lagoon in the small boat, Gene. It was fun to get off the ship and see it from the water, a perspective that you don’t get every day. After chores and a breakfast of chia seed oatmeal we headed ashore for a tour of the big island, Cooper. The research station staff are happy to have a student crew here, something that they don’t get too often. The majority of visitors to the atoll are research teams and sometimes donors so they seem stoked to show us around. Chris, the preserve manager, took us around all the facilities. These included the docks, galley, dive center and the lodging accommodations. All the staff live in their own little cabin down by the water fit with their own porch and shaded beneath the canopy. Chris said that they currently only have 17 staff living on atoll so they each have their own, but when research groups come they double up in the cabins and can fit up to 35. Chris’ portion of the tour wrapped up at the dry lab.

The second part of the tour was more nature focused and led by the Fish and Wildlife Officer, Allie, and the research volunteers. They started with an explanation of a project designed by a high schooler who 3D printed a series of hermit crab shells that have bluetooth tracking capabilities.

These fake shell contraptions allow the staff to track the crabs and gives them a reusable home in a shell-competitive environment. Ali explained that there are more crabs than shells on the atoll, so while the shells are pretty we can’t take any with us. They continued with a little demonstration of their mosquito eradication project and the equipment they designed for the job. They consist of a rain cover, a collection bag with a suction fan, and two forms of attraction - a human scent stick and a bagged mixture of yeast, sugar and water producing CO2.

Our tour continued to the north side of Cooper Island. Along the way we learned about native and invasive plant species and some of the projects they’re working on to eradicate certain invasives, namely coconut palms.

Coconuts were brought to the atoll in the late 20th century in hopes of creating a productive coconut plantation. When that didn’t succeed they were left behind and eventually forced out native species. Sand Island is an invasives-free island in the atoll and what the preserve is striving for in all their islands. The difference is visible with no palms towering above the native canopy. The north shore of the atoll was incredible. A turquoise lagoon stretched two miles out to the edge of the reef where perfect waves broke as if formed by a machine. Mullet and bonefish darted along the shoreline and tiny hermit crabs scrambled among the coral rubble. It’s a beautiful landscape complete with palms stretching out over the water.

Before heading back to the ship we stopped at the water hole for a swim. The water was the perfect temperature and blue as can be. We took turns climbing the rope swing and taking pictures with the waves crashing far off in the distance.

Back at the ship lunch was sandwiches on homemade bread and the sweetest grapefruit - a delicacy this far into a six week transit. The next group was preparing to head ashore for their island tour. This afternoon is a work day. Students are working on their final essays for MEH, sheet anchors and processing the first round of water samples collected on our transit south from Honolulu. Looking forward to what our relaxing day tomorrow will bring.