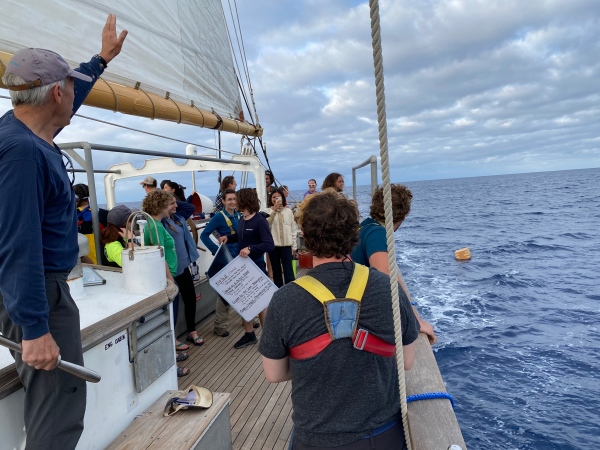 We’ve been motor-sailing (mostly motoring along, with sails set but flapping above us to make ourselves feel better about being a sailboat) because the wind as dropped as we get into the horse latitudes. We’re making good progress towards the equator, despite diverting course to go chase an eddy for one student’s project.

Evening watch yesterday oversaw the successful first deployments of all of the scientific equipment we will be chucking over the side (and retrieving) for the rest of the trip. We deployed the carousel, which is a framework that holds a bunch of bottles that can be programmed to close at particular depths, so we can get water samples from up to 4600 meters below the surface (though we are just going to 500m for this trip). We also towed a meter net, a net a meter in diameter that goes to 125m and collects all manner of biota, and we did a Newston tow, which gets us a surface sample (this one was bioluminescent, which is just as beautiful as you think it should be). The lab is now full of samples in various stages of being processed, and science continues apace! We have also been entrusted with several buoys to deploy for NOAA, and we chucked one over the side and watched it float away.

Evening watch (and the handful of people we woke up at midnight) also saw a partial lunar eclipse, with almost 90% of the moon occluded by the earth’s shadow. The full moon had be absurdly bright up to this point, and watching how dark (true, pitchy, inky black) it got without moon was a striking reminder at how much of our lives are filled with artificial light. We tried to get a celestial fix on our position by shooting some stars, but the stars were playing hide and seek with the clouds and won this particular round.

We are continuing to practice with sextants, however, and I’m sure we’ll get ‘em next time. I spent an hour as lookout as part of evening watch, and watching the sea roll by, lit only by a full moon, made me feel delightfully small, to be in a world with so much more to know. I saw both a spectacular shooting star and an airplane, which was a reminder both of how far humans have spread (even to this remote place) and how little we know about the world in which we find ourselves. Staring at the sea for an hour in the dead of night makes one contemplative I suppose.

All my love to my parents and favorite elder sibling. I’m delighted to be here.