A Sea of Islands 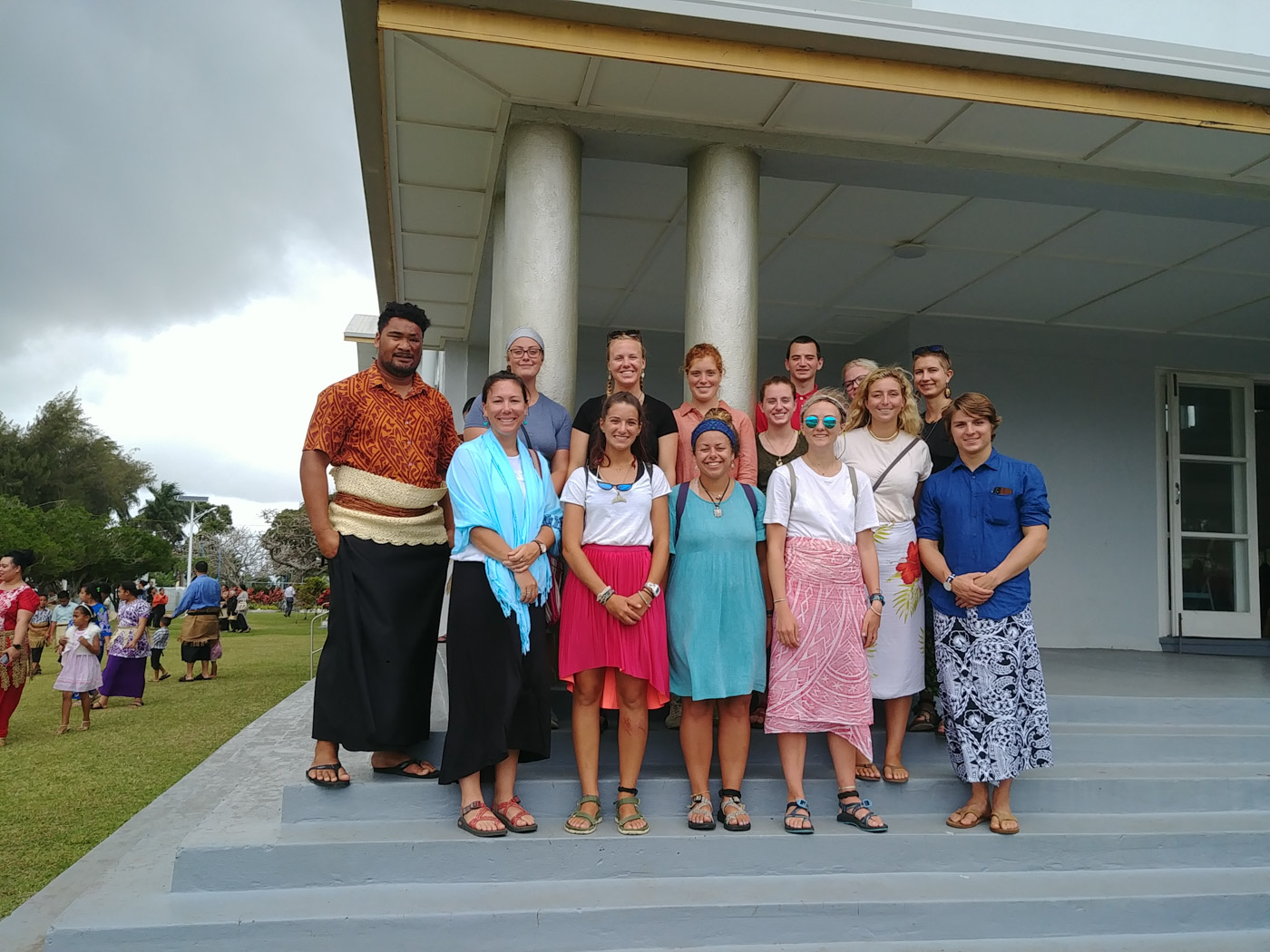 Under the moonlight of Friday, October 11, 2019, I eagerly trekked across Hunga Tonga Hunga Ha’apai (HTHH) with a team from Sea Education Association (SEA) and NASA to complete one final mission: to measure temperatures around the perimeter of the volcano’s crater lake. To our delight, our thermal imaging FLIR readings corroborated the hotspots reported earlier by our human temperature probes (students from the class of 288). Discovering the intermittent pockets of sediment that registered over 120°F was the perfect finale to our five-day research expedition on HTHH. 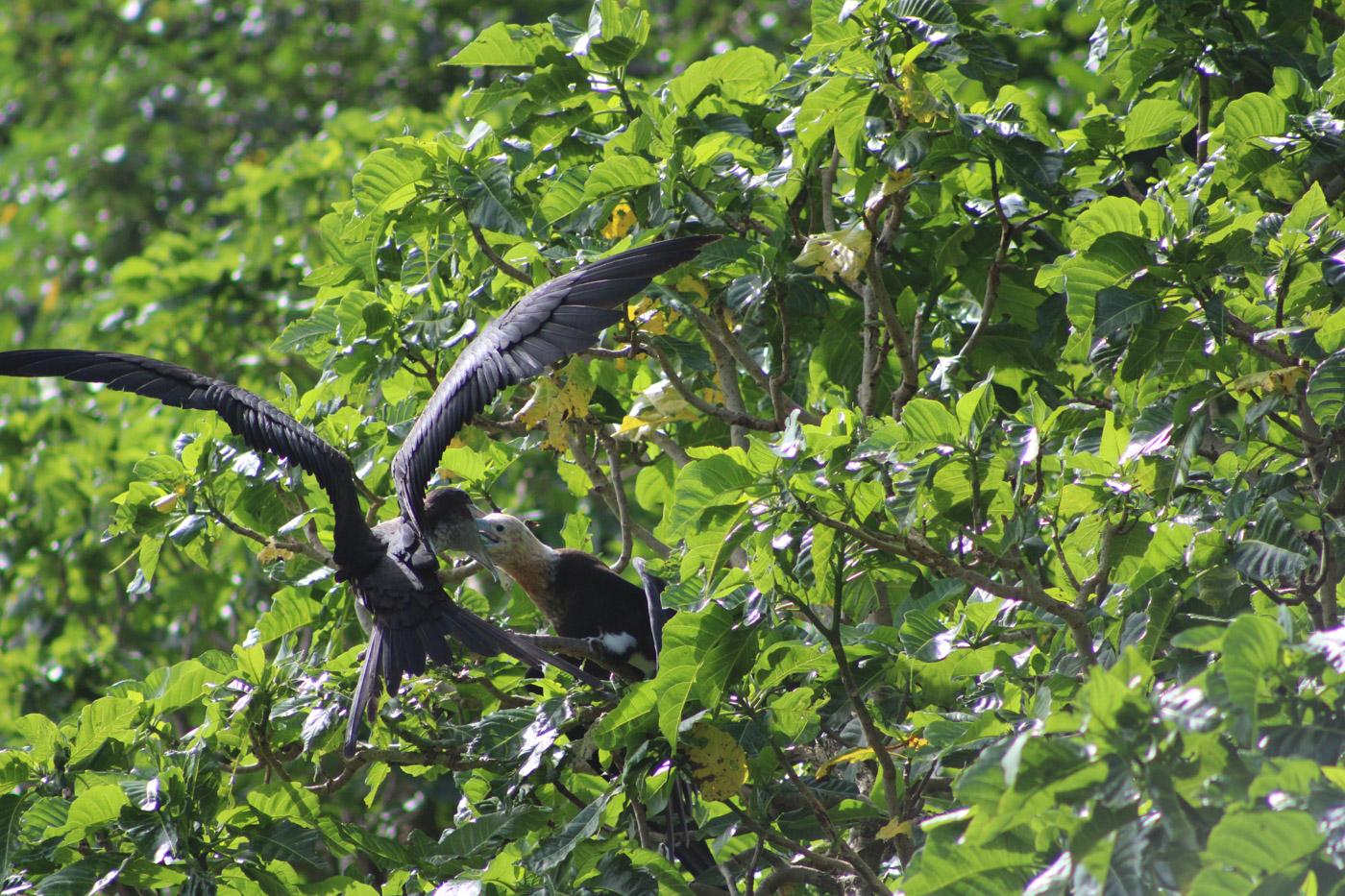 As chief anthropologist for Sea Education Association’s Sustainability in Polynesian Island Cultures and Ecosystems (SPICE) program this fall, I facilitate coursework geared towards understanding the diverse and interlinked human-nature relationships throughout our Pacific sailing track. From American Samoa through Tonga and Fiji to New Zealand, we study the dynamic historical, socio-economic, political, and environmental issues that have shaped, and are shaped by, the unique peoples and cultures of the region. At each port stop, students apply their newly acquired ethnographic skills to interview locals and conduct participant observation to answer their proposed research questions. Their projects focus on a range of topics including architecture, religion, tourism, resistance, and conservation in regards to their impacts on people’s sense of place, or connections to landscapes and seascapes, as well as cultural and ecological sustainability. How does one conduct anthropological research on an uninhabited island?

No one lives on HTHH. This is not particularly unique as there are a multitude of uninhabited islands spread throughout the island nations of Oceania. In the Hunga Ha’apai group alone, where HTHH is located, there are 62 islands, and only 17 are inhabited. As Tongan scholar Epeli Hau’ofa so eloquently argued, Oceania is not a region of tiny, dispersed, islands in a vast sea, it is instead a “sea of islands.” This distinction draws attention to the intimately interconnected island spaces that are made into meaningful places by generations of Polynesian seafarers who sailed through them, explored them, lived and thrived in them, and made them into their homes. While uninhabited, these islands are an integral part of the great networks of islands for Oceania people who identify as being of and from the sea. 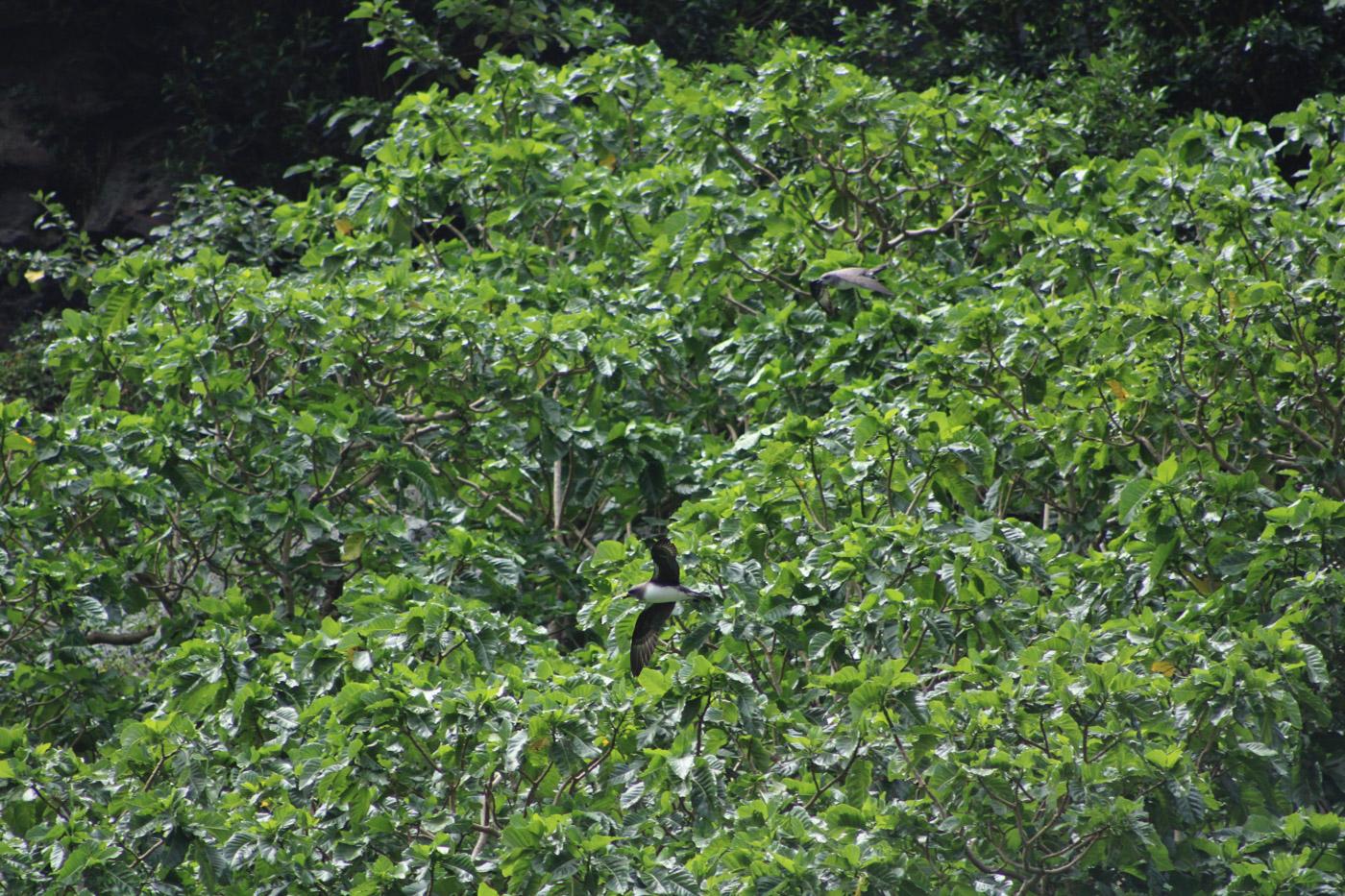 Arguably then, we can begin to grasp Hau’ofa’s concept as it pertains to HTHH as we conduct our research. SPICE, by nature, is an interdisciplinary program aimed at integrating anthropology with various ecological, geological, and biological sciences. We have been afforded the opportunity, by the King of Tonga none-the-less, to explore the unique features of HTHH. We are attempting to understand natural phenomena and ecological processes in less than a week here; something Polynesians have been doing throughout Oceania for centuries and building societies upon. Fortunately, we were equipped with 26 passionate students eager to literally jump in and conduct research in an ultimate learning experience.

In addition to my role as an anthropologist, I was able to revitalize my previous life as a wildlife biologist. My inner bird nerd was quickly reignited as I lead teams across desert-like (perhaps Mars-like) rocks, gravel, and sediment in search of new or yet to be “discovered” bird species. We easily identified brown boobies (Sula leucogaster), red-footed boobies (Sula sula), red-tailed tropic birds (Phaethon rubricauda), barn owls (Tyto alba), brown noddies (Anous stolidus), and lesser frigatebirds (Fregata ariel). We smelled the colony of 200+ sooty terns (Onychoprion fuscatus) well before we saw it. We passed frigate bird nests with hungry juveniles, screeching in a manner that I can only describe as that of a screaming child in the most terrifying horror film. I followed the horrific sounds and was able to capture the feeding frenzy on camera.

It took some time studying the bird book to positively ID a solo pacific golden plover (Pluvialis fulva) and a small group of ruddy turnstones (Arenaria interpres). Three elusive song bird species rapidly fluttered from bush to bush allowing for only blurred photos that will need to be examined further. A pigeon and a marsh bird also evaded my arduous attempts at identification. Based on physical features, specifically the distinct pink legs and black webbed toes, I finally determined that the petrels flying overhead were Phoenix Petrels (Pterodroma alba), an endangered species. Not only have some of these species survived the volcanic eruption in 2015, they are now thriving and colonizing the new landmass through natural processes of ecological succession.

I reflected on our research at HTHH as I listened to the melodic Royal Choir heartily sing hymns at the Free Wesleyan church of Tonga on Sunday, October 13. The King and Queen of Tonga sat in their elegant, plush, noble chairs, separated from us by a guarded section in the front of the church. Does the King know it was us, the 20+ foreign visitors in lava lavas sitting attentively in the back pews, who had just completed the collaborative research project on HTHH? Likely he did not notice us at all. However, through our collaborative research and reciprocal data sharing process, he will receive detailed information about all the accomplishments that SEA, NASA, and the Tongan Ministry of the Environment were able to complete on HTHH with his permission.

In five days, we collected over 100 GB of data from drone flights, photographs, geo-surveys, thermal imaging, and ROV surveys of corals. We collected 600 cubic feet of trash off the beaches and disposed it at Nuku’alofa. By all accounts, our mission was a great success. It has been an absolute honor to be involved in this mission along with SEA, NASA, the students, faculty, crew, our Tongan observer, and all our partners at each port stop. Our experiences on HTHH highlighted the interconnected links between peoples, cultures, and environments throughout the Kingdom of Tonga. As we continue our journey navigating through Oceania on the SSV Robert C. Seamans, our experiences at HTHH have made clear that we truly are in a sea of islands.